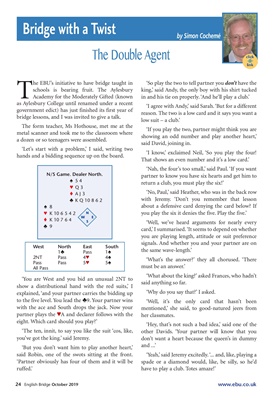 he EBU's initiative to have bridge taught in

schools is bearing fruit. The Aylesbury

Academy for the Moderately Gifted (known

as Aylesbury College until renamed under a recent

government edict) has just finished its first year of

bridge lessons, and I was invited to give a talk.

The form teacher, Ms Hothouse, met me at the

metal scanner and took me to the classroom where

a dozen or so teenagers were assembled.

'Let's start with a problem,' I said, writing two

hands and a bidding sequence up on the board.

'So play the two to tell partner you don't have the

king,' said Andy, the only boy with his shirt tucked

in and his tie on properly. 'And he'll play a club.'

'I agree with Andy,' said Sarah. 'But for a different

reason. The two is a low card and it says you want a

'If you play the two, partner might think you are

showing an odd number and play another heart,'

'I know,' exclaimed Neil, 'So you play the four!

That shows an even number and it's a low card.'

partner to know you have six hearts and get him to

return a club, you must play the six!'

'No, Paul,' said Heather, who was in the back row

with Jeremy. 'Don't you remember that lesson

about a defensive card denying the card below? If

you play the six it denies the five. Play the five.'

card,' I summarised. 'It seems to depend on whether

you are playing length, attitude or suit preference

signals. And whether you and your partner are on

'What's the answer?' they all chorused. 'There

must be an answer.'

'What about the king?' asked Frances, who hadn't

said anything so far.

'Well, it's the only card that hasn't been

mentioned,' she said, to good-natured jeers from

'Hey, that's not such a bad idea,' said one of the

other Davids. 'Your partner will know that you

don't want a heart because the queen's in dummy

spade or a diamond would, like, be silly, so he'd

have to play a club. Totes amaze!'

'You are West and you bid an unusual 2NT to

show a distributional hand with the red suits,' I

explained, 'and your partner carries the bidding up

to the five level. You lead the ®9. Your partner wins

with the ace and South drops the jack. Now your

partner plays the ™A and declarer follows with the

eight. Which card should you play?'

you've got the king.' said Jeremy.

'But you don't want him to play another heart,'

said Robin, one of the swots sitting at the front.

'Partner obviously has four of them and it will be