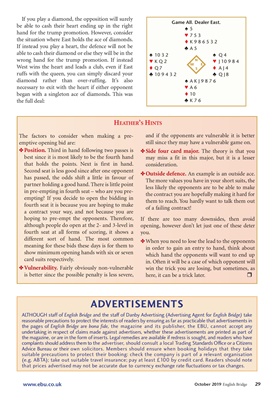 The factors to consider when making a preemptive

best since it is most likely to be the fourth hand

that holds the points. Next is first in hand.

Second seat is less good since after one opponent

has passed, the odds shift a little in favour of

partner holding a good hand. There is little point

in pre-empting in fourth seat - who are you preempting? If

you decide to open the bidding in

fourth seat it is because you are hoping to make

a contract your way, and not because you are

hoping to pre-empt the opponents. Therefore,

although people do open at the 2- and 3-level in

fourth seat at all forms of scoring, it shows a

different sort of hand. The most common

meaning for these bids these days is for them to

is better since the possible penalty is less severe,

and if the opponents are vulnerable it is better

still since they may have a vulnerable game on.

DSide four card major. The theory is that you

may miss a fit in this major, but it is a lesser

DOutside defence. An example is an outside ace.

The more values you have in your short suits, the

less likely the opponents are to be able to make

the contract you are hopefully making it hard for

them to reach. You hardly want to talk them out

of a failing contract!

If there are too many downsides, then avoid

opening, however don't let just one of these deter

DWhen you need to lose the lead to the opponents

in order to gain an entry to hand, think about

which hand the opponents will want to end up

in. Often it will be a case of which opponent will

win the trick you are losing, but sometimes, as

here, it can be a trick later. r

If you play a diamond, the opposition will surely

be able to cash their heart ending up in the right

hand for the trump promotion. However, consider

the situation where East holds the ace of diamonds.

If instead you play a heart, the defence will not be

wrong hand for the trump promotion. If instead

West wins the heart and leads a club, even if East

ruffs with the queen, you can simply discard your

diamond rather than over-ruffing. It's also

necessary to exit with the heart if either opponent

began with a singleton ace of diamonds. This was

the pages of English Bridge are bona fide, the magazine and its publisher, the EBU, cannot accept any

undertaking in respect of claims made against advertisers, whether these advertisements are printed as part of

the magazine, or are in the form of inserts. Legal remedies are available if redress is sought, and readers who have

complaints should address them to the advertiser, should consult a local Trading Standards Office or a Citizens

Advice Bureau or their own solicitors. Members should ensure when booking holidays that they take

suitable precautions to protect their booking: check the company is part of a relevant organisation

that prices advertised may not be accurate due to currency exchange rate fluctuations or tax changes.