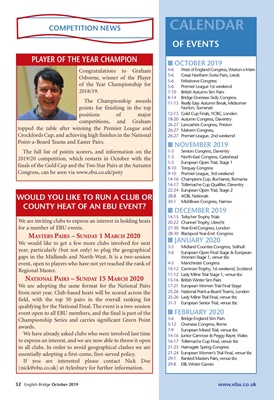 Osborne, winner of the Player

of the Year Championship for

points for finishing in the top

topped the table after winning the Premier League and

Crockfords Cup, and achieving high finishes in the National

The full list of points scorers, and information on the

2019/20 competition, which restarts in October with the

Congress, can be seen via www.ebu.co.uk/poty

We are inviting clubs to express an interest in holding heats

for a number of EBU events.

year, particularly (but not only) to plug the geographical

gaps in the Midlands and North-West. It is a two-session

event, open to players who have not yet reached the rank of

We are adopting the same format for the National Pairs

from next year. Club-based heats will be scored across the

field, with the top 50 pairs in the overall ranking list

qualifying for the National Final. The event is a two-session

event open to all EBU members, and the final is part of the

We have already asked clubs who were involved last time

to express an interest, and we are now able to throw it open

to all clubs.nick@ebu.co.ukvoid geographical clashes we are

(nick@ebu.co.uk) at Aylesbury for further information.

COUNTY HEAT OF AN EBU EVENT?

PLAYER OF THE YEAR CHAMPION