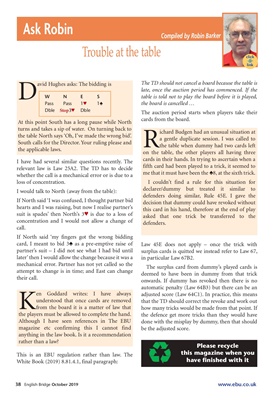 I have had several similar questions recently. The

relevant law is Law 25A2. The TD has to decide

I would talk to North (away from the table):

If North said 'I was confused, I thought partner bid

hearts and I was raising, but now I realise partner's

concentration and I would not allow a change of

If North said 'my fingers got the wrong bidding

card, I meant to bid 3´ as a pre-emptive raise of

partner's suit - I did not see what I had bid until

later' then I would allow the change because it was a

mechanical error. Partner has not yet called so the

attempt to change is in time; and East can change

Trouble at the table

ichard Budgen had an unusual situation at

a gentle duplicate session. I was called to

the table when dummy had two cards left

on the table, the other players all having three

cards in their hands. In trying to ascertain when a

fifth card had been played to a trick, it seemed to

me that it must have been the ´8, at the sixth trick.

I couldn't find a rule for this situation for

declarer/dummy but treated it similar to

decision that dummy could have revoked without

this card in his hand, therefore at the end of play

asked that one trick be transferred to the

en Goddard writes: I have always

understood that once cards are removed

from the board it is a matter of law that

the players must be allowed to complete the hand.

Although I have seen references in The EBU

anything in the law book. Is it a recommendation

rather than a law?

Law 45E does not apply - once the trick with

surplus cards is quitted we instead refer to Law 67,

The surplus card from dummy's played cards is

deemed to have been in dummy from that trick

onwards. If dummy has revoked then there is no

automatic penalty (Law 64B3) but there can be an

that the TD should correct the revoke and work out

how many tricks would be made from that point. If

the defence get more tricks than they would have

done with the misplay by dummy, then that should

be the adjusted score.

The TD should not cancel a board because the table is

late, once the auction period has commenced. If the

table is told not to play the board before it is played,

the board is cancelled …

The auction period starts when players take their

cards from the board.

avid Hughes asks: The bidding is

At this point South has a long pause while North

turns and takes a sip of water. On turning back to

the table North says 'Oh, I've made the wrong bid'.

South calls for the Director. Your ruling please and

This is an EBU regulation rather than law. The

this magazine when you