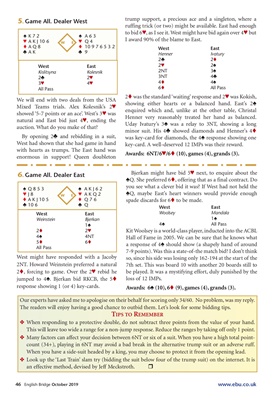 5. Game All. Dealer West trump support, a precious ace and a singleton, where a

ruffing trick (or two) might be available. East had enough

2t was the standard 'waiting' response and 2™ was Kokish,

showing either hearts or a balanced hand. East's 2´

enquired which and, unlike at the other table, Christal

Uday Ivatury's 3´ was a relay to 3NT, showing a long

was key-card for diamonds, the 4´ response showing one

key-card. A well-deserved 12 IMPs was their reward.

6. Game All. Dealer East Bjerkan might have bid 5™ next, to enquire about the

´Q. She preferred 6t, offering that as a final contract. Do

you see what a clever bid it was? If West had not held the

spade discards for 6t to be made.

Kit Woolsey is a world-class player, inducted into the ACBL

a response of 4´ should show (a shapely hand of around

7th set. This was board 10 with another 20 boards still to

be played. It was a mystifying effort, duly punished by the

Our experts have asked me to apologise on their behalf for scoring only 34/60. No problem, was my reply.

The readers will enjoy having a good chance to outbid them. Let's look for some bidding tips.

D When responding to a protective double, do not subtract three points from the value of your hand.

This will leave too wide a range for a non-jump response. Reduce the ranges by taking off only 1 point.

D Many factors can affect your decision between 6NT or six of a suit. When you have a high total pointcount

(34+), playing in 6NT may avoid a bad break in the alternative trump suit or an adverse ruff.

When you have a side-suit headed by a king, you may choose to protect it from the opening lead.

D Look up the 'Last Train' slam try (bidding the suit below four of the trump suit) on the internet. It is

We will end with two deals from the USA

auction. What do you make of that?

By opening 2® and rebidding in a suit,

West had shown that she had game in hand

with hearts as trumps. The East hand was