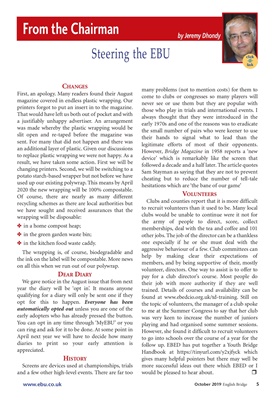 many problems (not to mention costs) for them to

come to clubs or congresses so many players will

never see or use them but they are popular with

those who play in trials and international events. I

always thought that they were introduced in the

early 1970s and one of the reasons was to eradicate

the small number of pairs who were keener to use

their hands to signal what to lead than the

legitimate efforts of most of their opponents.

However, Bridge Magazine in 1958 reports a 'new

followed a decade and a half later. The article quotes

Sam Stayman as saying that they are not to prevent

cheating but to reduce the number of tell-tale

hesitations which are 'the bane of our game'

Clubs and counties report that it is more difficult

to recruit volunteers than it used to be. Many local

clubs would be unable to continue were it not for

the army of people to direct, score, collect

memberships, deal with the tea and coffee and 101

other jobs. The job of the director can be a thankless

one especially if he or she must deal with the

aggressive behaviour of a few. Club committees can

help by making clear their expectations of

members, and by being supportive of their, mostly

volunteer, directors. One way to assist is to offer to

pay for a club director's course. Most people do

their job with more authority if they are well

trained. Details of courses and availability can be

found at www.ebedcio.org.uk/td-training. Still on

the topic of volunteers, the manager of a club spoke

to me at the Summer Congress to say that her club

was very keen to increase the number of juniors

playing and had organised some summer sessions.

However, she found it difficult to recruit volunteers

follow up. EBED has put together a Youth Bridge

gives many helpful pointers but there may well be

more successful ideas out there which EBED or I

would be pleased to hear about. r

From the Chairman by Jeremy Dhondy

First, an apology. Many readers found their August

printers forgot to put an insert in to the magazine.

That would have left us both out of pocket and with

a justifiably unhappy advertiser. An arrangement

was made whereby the plastic wrapping would be

slit open and re-taped before the magazine was

sent. For many that did not happen and there was

an additional layer of plastic. Given our discussions

to replace plastic wrapping we were not happy. As a

result, we have taken some action. First we will be

changing printers. Second, we will be switching to a

potato starch-based wrapper but not before we have

used up our existing polywrap. This means by April

Of course, there are nearly as many different

recycling schemes as there are local authorities but

we have sought and received assurances that the

wrapping will be disposable:

D in a home compost heap;

The wrapping is, of course, biodegradable and

the ink on the label will be compostable. More news

on all this when we run out of our polywrap.

We gave notice in the August issue that from next

year the diary will be 'opt in'. It means anyone

qualifying for a diary will only be sent one if they

opt for this to happen. Everyone has been

automatically opted out unless you are one of the

early adopters who has already pressed the button.

You can opt in any time through 'MyEBU' or you

can ring and ask for it to be done. At some point in

April next year we will have to decide how many

diaries to print so your early attention is

and a few other high-level events. There are far too