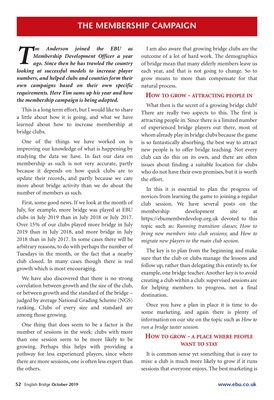 im Anderson joined the EBU as

ago. Since then he has trawled the country

numbers, and helped clubs and counties form their

own campaigns based on their own specific

requirements. Here Tim sums up his year and how

the membership campaign is being adopted.

a little about how it is going, and what we have

learned about how to increase membership at

One of the things we have worked on is

improving our knowledge of what is happening by

studying the data we have. In fact our data on

membership as such is not very accurate, partly

because it depends on how quick clubs are to

update their records, and partly because we care

more about bridge activity than we do about the

number of members as such.

First, some good news. If we look at the month of

July, for example, more bridge was played at EBU

Over 15% of our clubs played more bridge in July

arbitrary reasons, to do with perhaps the number of

Tuesdays in the month, or the fact that a nearby

club closed. In many cases though there is real

growth which is most encouraging.

We have also discovered that there is no strong

correlation between growth and the size of the club,

or between growth and the standard of the bridge -

ranking. Clubs of every size and standard are

One thing that does seem to be a factor is the

number of sessions in the week: clubs with more

than one session seem to be more likely to be

growing. Perhaps this helps with providing a

pathway for less experienced players, since where

there are more sessions, one is often less expert than

I am also aware that growing bridge clubs are the

outcome of a lot of hard work. The demographics

of bridge mean that many elderly members leave us

each year, and that is not going to change. So to

grow means to more than compensate for that

HOW TO GROW - ATTRACTING PEOPLE IN

What then is the secret of a growing bridge club?

There are really two aspects to this. The first is

attracting people in. Since there is a limited number

of experienced bridge players out there, most of

whom already play in bridge clubs because the game

is so fantastically absorbing, the best way to attract

new people is to offer bridge teaching. Not every

club can do this on its own, and there are often

issues about finding a suitable location for clubs

who do not have their own premises, but it is worth

In this it is essential to plan the progress of

novices from learning the game to joining a regular

club session. We have several posts on the

topic such as: Running transition classes; How to

bring new members into club sessions; and How to

The key is to plan from the beginning and make

sure that the club or clubs manage the lessons and

follow up, rather than delegating this entirely to, for

example, one bridge teacher. Another key is to avoid

creating a club within a club: supervised sessions are

for helping members to progress, not a final

some marketing, and again there is plenty of

information on our site on the topic such as How to

HOW TO GROW - A PLACE WHERE PEOPLE

It is common sense yet something that is easy to

miss: a club is much more likely to grow if it runs

sessions that everyone enjoys. The best marketing is