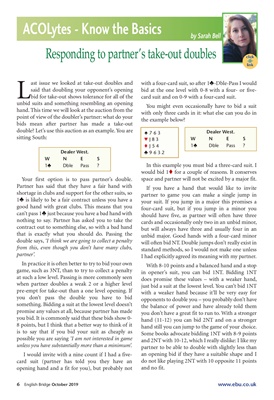 ast issue we looked at take-out doubles and

said that doubling your opponent's opening

bid for take-out shows tolerance for all of the

unbid suits and something resembling an opening

hand. This time we will look at the auction from the

point of view of the doubler's partner: what do your

bids mean after partner has made a take-out

double? Let's use this auction as an example. You are

with a four-card suit, so after 1®-Dble-Pass I would

You might even occasionally have to bid a suit

with only three cards in it: what else can you do in

In this example you must bid a three-card suit. I

would bid 1t for a couple of reasons. It conserves

space and partner will not be excited by a major fit.

If you have a hand that would like to invite

partner to game you can make a single jump in

your suit. If you jump in a major this promises a

four-card suit, but if you jump in a minor you

should have five, as partner will often have three

cards and occasionally only two in an unbid minor,

but will always have three and usually four in an

standard methods, so I would not make one unless

I had explicitly agreed its meaning with my partner.

With 8-10 points and a balanced hand and a stop

in opener's suit, you can bid 1NT. Bidding 1NT

does promise these values - with a weaker hand,

just bid a suit at the lowest level. You can't bid 1NT

with a weaker hand because it'll be very easy for

opponents to double you - you probably don't have

the balance of power and have already told them

you don't have a great fit to run to. With a stronger

hand still you can jump to the game of your choice.

partner to be able to double with slightly less than

an opening bid if they have a suitable shape and I

Your first option is to pass partner's double.

Partner has said that they have a fair hand with

shortage in clubs and support for the other suits, so

good hand with great clubs. This means that you

can't pass 1® just because you have a bad hand with

nothing to say. Partner has asked you to take the

contract out to something else, so with a bad hand

that is exactly what you should do. Passing the

double says, 'I think we are going to collect a penalty

from this, even though you don't have many clubs,

game, such as 3NT, than to try to collect a penalty

at such a low level. Passing is more commonly seen

when partner doubles a weak 2 or a higher level

pre-empt for take-out than a one level opening. If

you don't pass the double you have to bid

something. Bidding a suit at the lowest level doesn't

promise any values at all, because partner has made

you bid. It is commonly said that these bids show 0-

8 points, but I think that a better way to think of it

possible you are saying 'I am not interested in game

unless you have substantially more than a minimum'.

card suit (partner has told you they have an

opening hand and a fit for you), but probably not