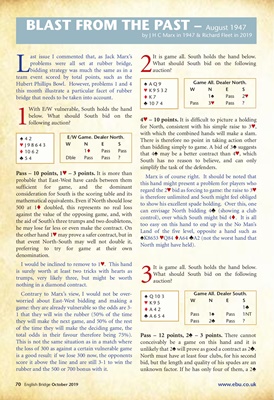 It is game all. South holds the hand below.

What should South bid on the following

probable that East-West have cards between them

sufficient for game, and the dominant

consideration for South is the scoring table and its

mathematical equivalents. Even if North should lose

500 at 1t doubled, this represents no real loss

against the value of the opposing game, and, with

the aid of South's three trumps and two doubletons,

he may lose far less or even make the contract. On

the other hand 1™ may prove a safer contract, but in

that event North-South may well not double it,

preferring to try for game at their own

I would be inclined to remove to 1™. This hand

is surely worth at least two tricks with hearts as

nothing in a diamond contract.

Contrary to Marx's view, I would not be overworried

about East-West bidding and making a

game: they are already vulnerable so the odds are 3-

they will make the next game, and 50% of the rest

of the time they will make the deciding game, the

total odds in their favour therefore being 75%).

This is not the same situation as in a match where

the loss of 300 as against a certain vulnerable game

is a good result: if we lose 300 now, the opponents

ast issue I commented that, as Jack Marx's

problems were all set at rubber bridge,

bidding strategy was much the same as in a

team event scored by total points, such as the

Hubert Phillips Bowl. However, problems 1 and 4

this month illustrate a particular facet of rubber

for North, consistent with his simple raise to 3™,

with which the combined hands will make a slam.

There is therefore no point in taking action other

than bidding simply to game. A bid of 3´ suggests

that 4´ may be a better contract than 4™, which

South has no reason to believe, and can only

simplify the task of the defenders.

Marx is of course right. It should be noted that

this hand might present a problem for players who

to show his excellent spade holding. Over this, one

control), over which South might bid 4t. It is all

Land of the five level, opposite a hand such as

It is game all. South holds the hand below.

What should South bid on the following

conceivably be a game on this hand and it is

unlikely that 2´ will prove as good a contract as 2®.

North must have at least four clubs, for his second

bid, but the length and quality of his spades are an

unknown factor. If he has only four of them, a 2´