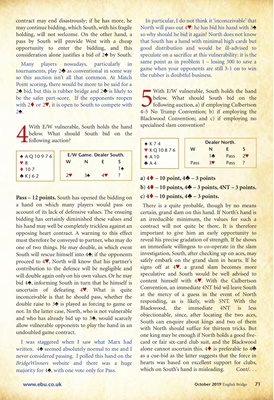 contract may end disastrously; if he has more, he

may continue bidding, which South, with his fragile

holding, will not welcome. On the other hand, a

pass by South will provide West with a cheap

opportunity to enter the bidding, and this

consideration alone justifies a bid of 2´ by South.

Many players nowadays, particularly in

tournaments, play 2® as conventional in some way

so this auction isn't all that common. At Match

Point scoring, there would be more to be said for a

be the safer part-score. If the opponents reopen

with 2t or 2™, it is open to South to compete with

Pass - 12 points. South has opened the bidding on

a hand on which many players would pass on

account of its lack of defensive values. The ensuing

bidding has certainly diminished these values and

his hand may well be completely trickless against an

opposing heart contract. A warning to this effect

must therefore be conveyed to partner, who may do

one of two things. He may double, in which event

South will rescue himself into 4´; if the opponents

proceed to 4™, North will know that his partner's

contribution to the defence will be negligible and

will double again only on his own values. Or he may

bid 4´, informing South in turn that he himself is

uncertain of defeating 4™. What is quite

inconceivable is that he should pass, whether the

double raise to 3´ is played as forcing to game or

not. In the latter case, North, who is not vulnerable

and who has already bid up to 3´, would scarcely

allow vulnerable opponents to play the hand in an

I was staggered when I saw what Marx had

written. 4´ seemed absolutely normal to me and I

never considered passing. I polled this hand on the

majority for 4´, with one vote only for Pass.

In particular, I do not think it 'inconceivable' that

so why should he bid it again? North does not know

that South has a hand with minimal high cards but

good distribution and would be ill-advised to

speculate on a sacrifice at this vulnerability: it is the

game when your opponents are still 3-1 on to win

the rubber is doubtful business.

following auction, a) if employing Culbertson

4-5 No Trump Convention; b) if employing the

Blackwood Convention; and c) if employing no

There is a quite probable, though by no means

certain, grand slam on this hand. If North's hand is

an irreducible minimum, the values for such a

contract will not quite be there. It is therefore

important to give him an early opportunity to

reveal his precise gradation of strength. If he shows

an immediate willingess to co-operate in the slam

investigation, South, after checking up on aces, may

safely embark on the grand slam in hearts. If he

signs off at 4™, a grand slam becomes more

speculative and South would be well advised to

at the mercy of a guess in the event of North

responding, as is likely, with 5NT. With the

Blackwood, the immediate 4NT is less

objectionable, since, after locating the two aces,

South can enquire about kings and two of them

with North should suffice for thirteen tricks. But

one king may be enough if North holds a good fivecard

or fair six-card club suit, and the Blackwood

alone cannot ascertain this. 4t is preferable to 4®

hearts was based on excellent support for clubs,

which on South's hand is misleading. Cont/. . .