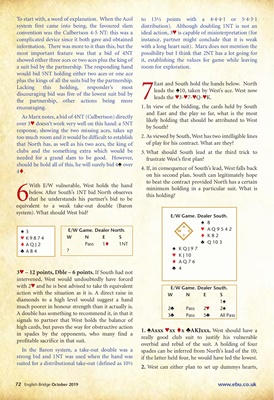 that he understands his partner's bid to be

system). What should West bid?

intervened, West would undoubtedly have forced

with 2™ and he is best advised to take th equivalent

action with the situation as it is. A direct raise in

diamonds to a high level would suggest a hand

much poorer in honour strength than it actually is.

A double has something to recommend it, in that it

signals to partner that West holds the balance of

high cards, but paves the way for obstructive action

in spades by the opponents, who many find a

profitable sacrifice in that suit.

In the Baron system, a take-out double was a

strong bid and 1NT was used when the hand was

suited for a distributional take-out (defined as 10½

East and South hold the hands below. North

1. In view of the bidding, the cards held by South

and East and the play so far, what is the most

likely holding that should be attributed to West

2. As viewed by South, West has two intelligible lines

of play for his contract. What are they?

3. What should South lead at the third trick to

4. If, in consequence of South's lead, West falls back

on his second plan, South can legitimately hope

to beat the contract provided North has a certain

minimum holding in a particular suit. What is

To start with, a word of explanation. When the Acol

system first came into being, the favoured slam

convention was the Culbertson 4-5 NT: this was a

complicated device since it both gave and obtained

information. There was more to it than this, but the

most important feature was that a bid of 4NT

showed either three aces or two aces plus the king of

a suit bid by the partnership. The responding hand

would bid 5NT holding either two aces or one ace

plus the kings of all the suits bid by the partnership.

Lacking this holding, responder's most

discouraging bid was five of the lowest suit bid by

the partnership, other actions being more

As Marx notes, a bid of 4NT (Culbertson) directly

over 3™ doesn't work very well on this hand: a 5NT

too much room and it would be difficult to establish

that North has, as well as his two aces, the king of

clubs and the something extra which would be

needed for a grand slam to be good. However,

should he hold all of this, he will surely bid 4´ over

distribution). Although doubling 1NT is not an

ideal action, 3™ is capable of misinterpretation (for

with a long heart suit). Marx does not mention the

possibility but I think that 2NT has a lot going for

it, establishing the values for game while leaving

overbid and rebid of the suit. A holding of four

spades can be inferred from North's lead of the 10;

if the latter held four, he would have led the lowest.

2. West can either plan to set up dummys hearts,