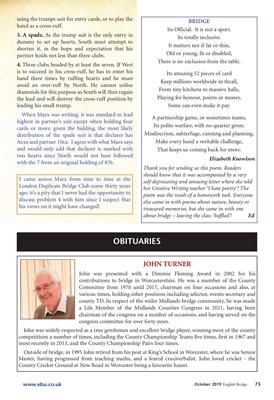 contributions to bridge in Worcestershire. He was a member of the County

Committee from 1970 until 2017, chairman on four occasions and also, at

various times, holding other positions including selector, events secretary and

county TD. In respect of the wider Midlands bridge community, he was made

a Life Member of the Midlands Counties Congress in 2011, having been

chairman of the congress on a number of occasions, and having served on the

congress committee for over forty years.

John was widely respected as a true gentleman and excellent bridge player, winning most of the county

competitions a number of times, including the County Championship Teams five times, first in 1967 and

most recently in 2013, and the County Championship Pairs four times.

Outside of bridge, in 1995 John retired from his post at King's School in Worcester, where he was Senior

Master, having progressed from teaching maths, and a feared cruciverbalist. John loved cricket - the

County Cricket Ground at New Road in Worcester being a favourite haunt.

using the trumps suit for entry cards, or to play the

3. A spade. As the trump suit is the only entry in

dummy to set up hearts, South must attempt to

shorten it, in the hope and expectation that his

4. Three clubs headed by at least the seven. If West

is to succeed in his cross-ruff, he has to enter his

hand three times by ruffing hearts and he must

avoid an over-ruff by North. He cannot utilise

diamonds for this purpose as South will then regain

the lead and will destroy the cross-ruff position by

When Marx was writing, it was standard to lead

highest in partner's suit except when holding four

cards or more: given the bidding, the most likely

distribution of the spade suit is that declarer has

Axxx and partner 10xx. I agree with what Marx says

and would only add that declarer is marked with

two hearts since North would not have followed

I came across Marx from time to time at the

ago: it's a pity that I never had the opportunity to

discuss problem 4 with him since I suspect that

Its Official. It is not a sport.

It matters not if fat or thin,

Old or young, fit or disabled,

There is no exclusion from the table.

Its amazing 52 pieces of card

From tiny kitchens to massive halls,

Playing for honour, points or money,

Some can even make it pay.

A partnership game, or sometimes teams,

Its polite warfare, with no quarter given.

Make every hand a veritable challenge,

That keeps us coming back for more.

Thank you for sending us this poem. Readers

should know that it was accompanied by a very

self-deprecating and amusing letter where she told

her Creative Writing teacher 'I hate poetry'! The

poem was the result of a homework task. Everyone

else came in with poems about nature, beauty or

treasured memories, but she came in with one