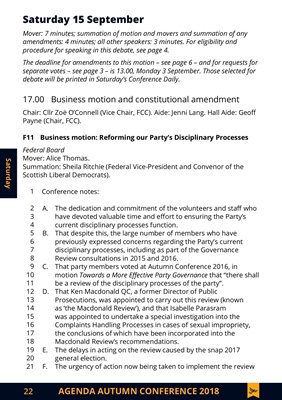 amendments: 4 minutes; all other speakers: 3 minutes. For eligibility and

procedure for speaking in this debate, see page 4.

debate will be printed in Saturday's Conference Daily.

Summation: Sheila Ritchie (Federal Vice-President and Convenor of the

A. The dedication and commitment of the volunteers and staff who

have devoted valuable time and effort to ensuring the Party's

B. That despite this, the large number of members who have

disciplinary processes, including as part of the Governance

C. That party members voted at Autumn Conference 2016, in

motion Towards a More Effective Party Governance that "there shall

be a review of the disciplinary processes of the party".

D. That Ken Macdonald QC, a former Director of Public

Prosecutions, was appointed to carry out this review (known

as 'the Macdonald Review'), and that Isabelle Parasram

was appointed to undertake a special investigation into the

the conclusions of which have been incorporated into the

E. The delays in acting on the review caused by the snap 2017

F. The urgency of action now being taken to implement the review