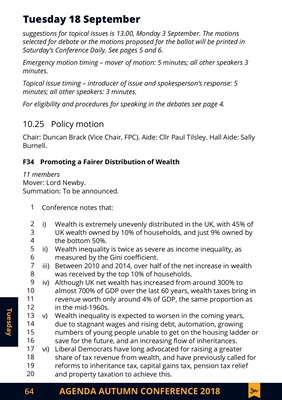 suggestions for topical issues is 13.00, Monday 3 September. The motions

Emergency motion timing - mover of motion: 5 minutes; all other speakers 3

minutes; all other speakers: 3 minutes.

For eligibility and procedures for speaking in the debates see page 4.

Summation: To be announced.

i) Wealth is extremely unevenly distributed in the UK, with 45% of

UK wealth owned by 10% of households, and just 9% owned by

ii) Wealth inequality is twice as severe as income inequality, as

measured by the Gini coefficient.

was received by the top 10% of households.

iv) Although UK net wealth has increased from around 300% to

almost 700% of GDP over the last 60 years, wealth taxes bring in

revenue worth only around 4% of GDP, the same proportion as

v) Wealth inequality is expected to worsen in the coming years,

due to stagnant wages and rising debt, automation, growing

save for the future, and an increasing flow of inheritances.

vi) Liberal Democrats have long advocated for raising a greater

share of tax revenue from wealth, and have previously called for

and property taxation to achieve this.