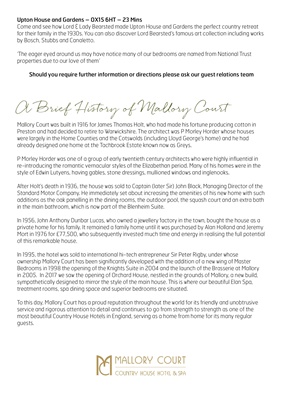 for their family in the 1930s. You can also discover Lord Bearsted's famous art collection including works

by Bosch, Stubbs and Canaletto.

properties due to our love of them'

A Brief History of Mallory Court

Mallory Court was built in 1916 for James Thomas Holt, who had made his fortune producing cotton in

Preston and had decided to retire to Warwickshire. The architect was P Morley Horder whose houses

already designed one home at the Tachbrook Estate known now as Greys.

re-introducing the romantic vernacular styles of the Elizabethan period. Many of his homes were in the

After Holt's death in 1936, the house was sold to Captain (later Sir) John Black, Managing Director of the

Standard Motor Company. He immediately set about increasing the amenities of his new home with such

additions as the oak panelling in the dining rooms, the outdoor pool, the squash court and an extra bath

in the main bathroom, which is now part of the Blenheim Suite.

In 1956, John Anthony Dunbar Lucas, who owned a jewellery factory in the town, bought the house as a

private home for his family. It remained a family home until it was purchased by Alan Holland and Jeremy

Mort in 1976 for £77,500, who subsequently invested much time and energy in realising the full potential

of this remarkable house.

In 1995, the hotel was sold to international hi-tech entrepreneur Sir Peter Rigby, under whose

sympathetically designed to mirror the style of the main house. This is where our beautiful Elan Spa,

To this day, Mallory Court has a proud reputation throughout the world for its friendly and unobtrusive

most beautiful Country House Hotels in England, serving as a home from home for its many regular