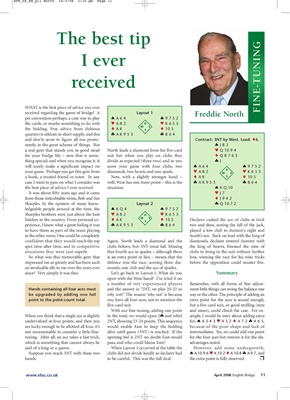 WHAT is the best piece of advice you ever

received regarding the game of bridge? A

pet convention perhaps, a cute way to play ♠ A 64

nently in the great scheme of things. But ♠J83

thing special; and when you recognise it, it divide as expected (three-two) and so you ♣J

will surely make a significant impact on score your game with four clubs, two ♠A64 ♠ 9752

the best piece of advice I ever received. situation: ♠ K Q 10

It was about fifty years ago and it came ♥J7

from those redoubtable twins, Bob and Jim ♦J942

bidders in the country. From personal ex- ♦ AK S ♦ 10 5 Declarer cashed the ace of clubs at trick

in the other room. One could be completely South’s ten. Back on lead with the king of

confident that they would reach the top Again, North leads a diamond and the diamonds, declarer entered dummy with

spot time after time, and in competitive clubs behave, but 3NT must fail. Missing the king of hearts, finessed the nine of

situations they were just superb. that fourth ace in spades – although there clubs to bring in the suit without further

So what was this memorable gem that is an extra point in lieu – means that the loss, winning the race for his nine tricks

impressed me so greatly and has been such defence win the race, scoring three dia- before the opposition could muster five.

an invaluable ally to me over the years ever monds, one club and the ace of spades.

since? Very simply it was this: Let’s go back to Layout 1. What do you Summary

open with the West hand? I’ve tried it on

a number of very experienced players Remember, with all forms of fine adjust-

Hands containing all four aces must and the answer is: ‘2NT, we play 20-22 so ment little things can swing the balance one

be upgraded by adding one full why not?’ The reason ‘why not’ is because way or the other. The principle of adding an

point to the point-count total. you have all four aces, not to mention the extra point for the aces is sound enough,

With our fine-tuning, adding one point and nines), could clinch the case. For ex-

When you think that a single ace is slightly to the total, we would open 2♣ and rebid ample, I would be wary about adding extra

are lucky enough to be allotted all four, it’s would enable East to keep the bidding because of the poor shape and lack of

not unreasonable to consider a little fine- alive until game (3NT) is reached. If the intermediates. Yes, we could add one point

tuning. After all, an ace takes a fast trick, opening bid is 2NT no doubt East would for the four aces but remove it for the dis-

which is something that cannot always be pass, and who could blame him? advantages noted.

said of a king or a queen. When Layout 1 occurred at the table the However, add some undergrowth,

hands: to be careful. This was the full deal: the extra point is fully deserved.