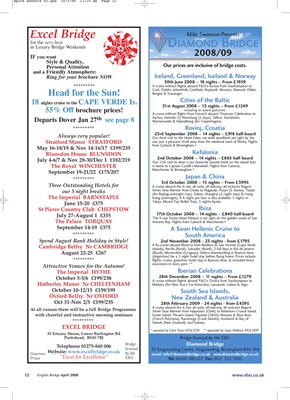 Personal Attention Our prices are inclusive of bridge costs.

Head for the Sun! Bergen & Stavanger.

18 nights cruise to the CAPE VERDE Is. Cities of the Baltic

55% Off brochure prices! including on board gratuities.

Always very popular! Our third visit to the Hotel Eden, set amid woodland yet right by the

Stratford Manor STRATFORD sea, just a pleasant stroll away from the medieval town of Rovinj. Flights

The Royal WINCHESTER is home to Captain Corelli's Mandolin. Flights from Gatwick,

Three Outstanding Hotels for A cruise aboard the 6-star all-suite, all-balcony, all-inclusive Regent

The Imperial BARNSTAPLE Kong (overnight). A 6-night pre-tour is also available: 3 nights in

excursions in every port. **

Attractive Venues for the Autumn!

At all venues there will be a full Bridge Programme Seven Seas Mariner from Valparaiso (Chile) to Robinson Crusoe Island,