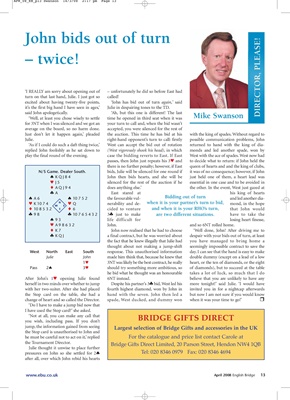 John bids out of turn

turn on that last hand, Julie. I just got so called!

excited about having twenty-five points, ‘John has bid out of turn again,’ said

it’s the first big hand I have seen in ages,’ Julie in despairing tones to the TD.

said John apologetically. ‘Ah, but this one is different! The last

‘Well, at least you chose wisely to settle time he opened in third seat when it was Mike Swanson

for 3NT when I was silenced and we got an your turn to call and, when the bid wasn’t

average on the board, so no harm done. accepted, you were silenced for the rest of

Just don’t let it happen again,’ pleaded the auction. This time he has bid at his with the king of spades. Without regard to

‘As if I could do such a daft thing twice,’ West can accept the bid out of rotation returned to hand with the king of dia-

replied John foolishly as he sat down to (West vigorously shook his head), in which monds and led another spade, won by

play the final round of the evening. case the bidding reverts to East. If East West with the ace of spades. West now had

passes, then John just repeats his 3♥ and to decide what to return: if John held the

there is no further penalty; however, if East queen of hearts and and the king of clubs,

N/S Game. Dealer South. bids, Julie will be silenced for one round if it was of no consequence; however, if John

♠ KQJ84 John then bids hearts, and she will be just held one of them, a heart lead was

♦ AQJ94 does anything else.’ the other. In the event, West just gazed at

♣A East stared at his king of hearts

♥Q nerability and de- when it is your partner’s turn to bid, mond, in the hope

♦ K7 John now realised that he had to choose ‘Well done, John! After driving me to

♣ KQJ a final contract, but he was worried about despair with your bids out of turn, at least

West North East South response. This unauthorised information day. I can see that the hand is easy to make

Julie John made him think that, because he knew that double dummy (except on a lead of a low

1♥ 3NT was likely be the best contract, he really heart, or the ten of diamonds, or the eight

Pass 2♠ 3♥ should try something more ambitious, so of diamonds), but to succeed at the table

he bid what he thought was an honourable takes a lot of luck, so much that I do

After John’s 1♥ opening Julie found 6NT instead. believe that you are unlikely to have any

herself in two minds over whether to jump Despite his partner’s 3♣ bid, West led his more tonight!’ said Julie. ‘I would have

with her two-suiter. After she had placed fourth highest diamond, won by John in invited you in for a nightcap afterwards

the Stop card on the table, she had a hand with the seven. John then led a but now I am not sure if you would know

change of heart and so called the Director. spade, West ducked, and dummy won when it was your time to go!’

‘Do I have to make a jump bid now that

I have used the Stop card?’ she asked.

‘Not at all, you can make any call that

you wish, including pass. If you don’t BRIDGE GIFTS DIRECT

jump, the information gained from seeing Largest selection of Bridge Gifts and accessories in the UK

the Stop card is unauthorised to John and

he must be careful not to act on it,’ replied For the catalogue and price list contact Carole at

after all, over which John rebid his hearts