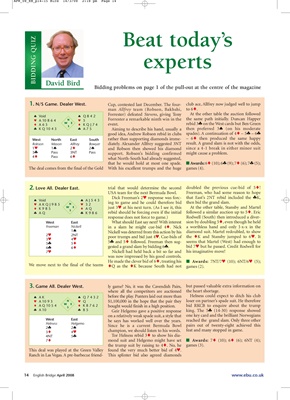 what North-South had already suggested,

The deal comes from the final of the Gold With his excellent trumps and the huge games (4).

2. Love All. Dealer East. trial that would determine the second doubled the previous cue-bid of 5♦!

USA team for the next Bermuda Bowl. Freeman, who had some reason to hope

♦ AQ just 3♥ at his next turn. (As I see it, this At the other table, Stansby and Martel

♣ AQ ♣ K986 rebid should be forcing even if the initial followed a similar auction up to 5♦. Eric

response does not force to game.) Rodwell (South) then introduced a diver-

West East What should East say next? With interest sion by doubling 5♦, even though he held

Freeman Nickell in a slam he might cue-bid 4♦. Nick a worthless hand and only J-x-x in the

1♠ Nickell was deterred from this action by his diamond suit. Martel redoubled, to show

7♥ Nickell had held back a bit so far and his imaginative move!

was now impressed by his good controls.

We move next to the final of the teams ♦Q as the ♦K because South had not games (2).

3. Game All. Dealer West. ly game? No, it was the Cavendish Pairs, but passed valuable extra information on

where all the competitors are auctioned the heart shortage.

♠ A K ♠ Q7432 before the play. Punters laid out more than Helness could expect to ditch his club

♦ K8762 bought would finish in a high position. bid RKCB to enquire about the trump

on a relatively weak spade suit, a style that one key card and the brilliant Norwegians

West East he says has worked well over the years. reached the grand slam. Only three other

3♦ 4♥ champion, we should listen to his words. feat and many stopped in game.

This deal was played at the Green Valley found the very much better bid of 4♥.