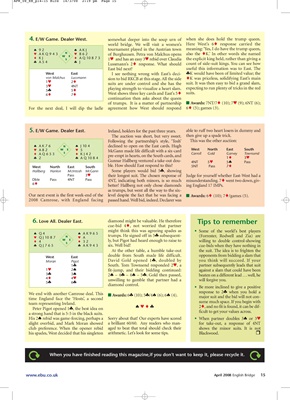 4. E/W Game. Dealer West. somewhat deeper into the soup urn of when she does hold the trump queen.

world bridge. We will visit a women’s Here West’s 6♦ response carried the

♠ 92 ♠ AKJ tournament played in the Austrian town meaning: ‘Yes, I do have the trump queen,

♥ 862 of Burghausen. Petra von Malchus opens also the ♦K.’ In other words she named

Lussmann’s 2♦ response. What should count of side-suit kings. You can see how

East bid next? useful this information was to East. The

West East I see nothing wrong with East’s deci- ♣K would have been of limited value; the

von Malchus Lussmann sion to bid RKCB at this stage. All the side ♦K was priceless, solidifying East’s main

suits are under control and she has the

5♣ 5♦ playing strength to visualize a heart slam. expecting to run plenty of tricks in the red

continuation then asks about the queen

5. E/W Game. Dealer East. Ireland, holders for the past three years. able to ruff two heart losers in dummy and

The auction was short, but very sweet. then give up a spade trick.

Following the partnership’s style, ‘Tosh’ This was the other auction:

McGann made life difficult with a six-card

West North East South ble. How should East respond to this? 5NT Pass 7♦

Pass 3♥ their longest suit. The chosen response of Judge for yourself whether East-West had a

Dble Pass 4NT Pass 4NT, indicating both minors, is so much misunderstanding. 7♦ went two down, giv-

as trumps, but went all the way to the six-

6. Love All. Dealer East. diamond might be valuable. He therefore Tips to remember

cue-bid 4♦, not worried that partner

♦ 32 ly, but Pigot had heard enough to raise to willing to double control-showing

At the other table, a humble take-out the suit. The idea is to frighten the

West East double from South made life difficult. opponents from bidding a slam that

Moran Pigot David Gold opened 1 ♣ , doubled by you think will succeed. If your

1♥ 2♠ fit-jump, and their bidding continued: against a slam that could have been

unwilling to gamble that partner had a will forgive you.

• Be more inclined to give a positive

We end with another Camrose deal. This response to 2♣ when you hold a

team representing Ireland. sume much space. If you begin with

a strong hand that is 5-5 in the black suits. ficult to get your values across.

His 2♠ rebid was game-forcing, perhaps a Sorry about that! Our experts have scored • When partner doubles 3♠ or 3♥

slight overbid, and Mark Moran showed a brilliant 60/60. Any readers who man- for take-out, a response of 4NT

club preference. When the opener rebid aged to beat that total should check their shows the minor suits. It is not

his spades, West decided that his singleton arithmetic. Let’s look for some tips. Blackwood.