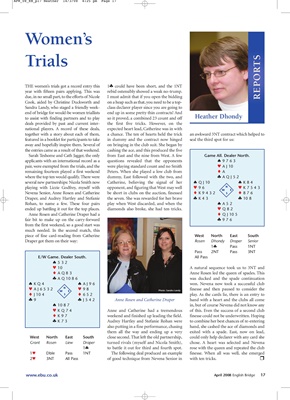 THE women’s trials got a record entry this 1♣ could have been short, and the 1NT

year with fifteen pairs applying. This was rebid ostensibly showed a weak no-trump.

due, in no small part, to the efforts of Nicole I must admit that if you open the bidding

Cook, aided by Christine Duckworth and on a heap such as that, you need to be a top-

Sandra Landy, who staged a friendly week- class declarer player since you are going to

end of bridge for would-be women triallists end up in some pretty thin contracts! And

to assist with finding partners and to play so it proved, a combined 23 count and off Heather Dhondy

deals provided by past and current inter- the first five tricks. However, on the

national players. A record of these deals, expected heart lead, Catherine was in with

together with a story about each of them, a chance. The ten of hearts held the trick an awkward 3NT contract which helped to

featured in a booklet for participants to take in dummy and the contract now hinged seal the third spot for us:

away and hopefully inspire them. Several of on bringing in the club suit. She began by

the entries came as a result of that weekend. cashing the ace, and this produced the five

Sarah Teshome and Cath Jagger, the only from East and the nine from West. A few Game All. Dealer North.

pair, were exempted from the trials, and the were playing standard count and no Smith ♥ A J 10

remaining fourteen played a first weekend Peters. When she played a low club from ♦A

where the top ten would qualify. There were dummy, East followed with the two, and ♣AQJ52

playing with Lizzie Godfrey, myself with opponent, and figuring that West may well ♥ 96 W

Nevena Senior, Anne Rosen and Catherine be short in clubs on the auction, finessed ♦ K9432 S ♦876

Draper, and Audrey Hartley and Stefanie the seven. She was rewarded for her brave ♣ K43 ♣ 10 8

Rohan, to name a few. These four pairs play when West discarded, and when the ♠A52

ended up battling it out for the top places. diamonds also broke, she had ten tricks. ♥Q82

fair bit to make up on the carry-forward ♣976

from the first weekend, so a good start was

much needed. In the second match, this

Draper got them on their way: Rosen Dhondy Draper Senior

♦AQ83 Anne Rosen led the queen of spades. This

♥98 Photo: Sandra Landy finesse and then paused to consider the

♥KQ74 Anne and Catherine had a tremendous of this. Even the success of a second club

♦K97 weekend and finished up leading the field. finesse could not be underwritten. Hoping

also putting in a fine performance, chasing hand, she cashed the ace of diamonds and

them all the way and ending up a very exited with a spade. East, now on lead,

West North East South close second. That left the old partnership, could only help declarer with any card she

1♣ to battle it out for third and fourth spot. rose with the queen and repeated the club

1♥ Dble Pass 1NT The following deal produced an example finesse. When all was well, she emerged

2♥ 3NT All Pass of good technique from Nevena Senior in with ten tricks.