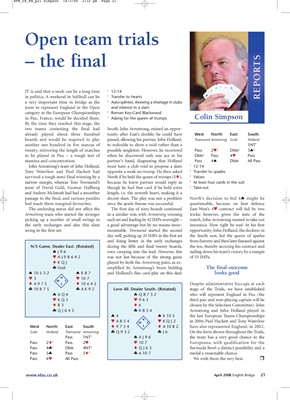 in politics. A weekend in Solihull can be 2

a very important time in bridge as the 3

Auto-splinter, showing a shortage in clubs

category at the European Championships 4

in Pau, France, would be decided there. 5

Asking for the queen of trumps Colin Simpson

By the time they reached this stage, the

already played about three hundred tunity after East’s double: he could have West North East South

twenty, mirroring the length of matches possible singleton. However, he recovered Pass 2♥ 2

John Armstrong’s team of John Holland, must have a club void to propose a slam 1

Tony Waterlow and Paul Hackett had opposite a weak no-trump. He then asked 2

survived a tough semi-final winning by a North if he held the queen of trumps (5♦), 3

narrow margin, whereas Tom Townsend’s because he knew partner would reply as 4

At least four cards in the suit

team of David Gold, Gunnar Hallberg though he had that card if he held extra 5

and Andrew McIntosh had had a smoother length, i.e. the seventh heart, making it a

passage to the final, and various pundits decent slam. The play was not a problem North’s decision to bid 4 ♠ might be

had made them marginal favourites. once the spade finesse was successful. questionable, because on best defence

Armstrong team who started the stronger in a similar vein with Armstrong winning tricks; however, given the state of the

picking up a number of small swings in each set and leading by 42 IMPs overnight – match, John Armstrong wanted to take out

the early exchanges and also this slam a good advantage but by no means insur- insurance. How right he was! At his first

swing in the first set: mountable. Townsend started the second opportunity, John Holland, the declarer in

day well, picking up 20 IMPs in the first set the South seat, led the queen of spades

N/S Game. Dealer East. (Rotated) during the fifth and final twenty boards, the ten, thereby securing his contract and

♠J96 even creeping into the lead. However, this nailing down his team’s victory by a margin

♦KQJ played by both the Armstrong pairs, as ex-

♥KQ5 ♥963 third pair and non-playing captain will be

Gold Holland Townsend Armstrong ♣ Q932 ♣ J6 On the form shown throughout the Trials,

Pass 6♥ All Pass We wish them the very best.