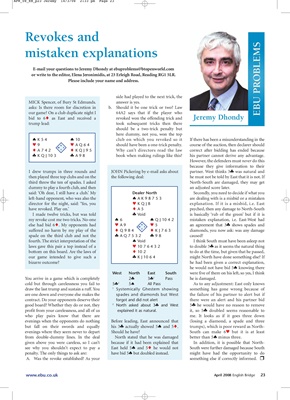 side had played to the next trick, the

asks: Is there room for discretion in b. Should it be one trick or two? Law

our game? On a club duplicate night I 64A2 says that if the player who

should be a two-trick penalty but

here dummy, not you, won the top

♥ AQ64 should have been a one-trick penalty. course of the auction, then declarer should

♣ K Q J 10 3 ♣ A98 book when making rulings like this? his partner cannot derive any advantage.

However, the defenders must never do this

because they give information to their

I drew trumps in three rounds and JOHN Pickering by e-mail asks about partner. West thinks 3♣ was natural and

then played three top clubs and on the the following deal: he must not be told by East that it is not. If

third threw the ten of spades. I asked North-South are damaged, they may get

dummy to play a fourth club, and then an adjusted score later.

said: ‘Oh dear, I still have a club.’ My Dealer North Secondly, you need to decide if what you

left-hand opponent, who was also the ♠AK98753 are dealing with is a misbid or a mistaken

director for the night, said: ‘Yes, you ♥KQJ8 explanation. If it is a misbid, i.e. East

have revoked. Play on.’ ♦A5 psyched, then any damage to North-South

I made twelve tricks, but was told ♣ Void is basically ‘rub of the green’ but if it is

♥5 an agreement that 3♣ shows spades and

fourth. The strict interpretation of the ♠ Void I think South must have been asleep not

our game intended to give such a ♣ K J 10 6 4 might North have done something else? If

bizarre outcome? he had been given a correct explanation,

he would not have bid 5♠ knowing there

West North East South were five of them on his left, so yes, I think

You arrive in a game which is completely 2♣ 3♣1 Pass he is damaged.

cold but through carelessness you fail to 5♣2 5♠ All Pass As to any adjustment: East only knows

draw the last trump and sustain a ruff. You 1

Systemically Ghestem showing something has gone wrong because of

contract. Do your opponents deserve their forgot and did not alert there were an alert and his partner bid

good board? Whether they do or not, they 2

profit from your carelessness, and all of us explained it as natural. it, so 5♣ doubled seems reasonable to

who play pairs know that there are me. It looks as if it goes three down

evenings when the opponents do nothing Before leading, East announced that (losing a diamond, a spade and three

but fall on their swords and equally his 3♣ actually showed 5♠ and 5♦. trumps), which is poor reward as North-

evenings where they seem never to depart Should he have? South can make 6♥ but it is at least

from double-dummy lines. In the deal North stated that he was damaged better than 5♠ minus three.

given above you were careless, so I can’t because if it had been explained that In addition, it is possible that North-

penalty. The only things to ask are: have bid 5♠ but doubled instead. might have had the opportunity to do

A. Was the revoke established? As your something else if correctly informed.