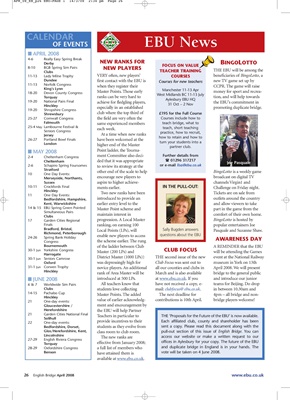 11-13 Norfolk Congress when they register their CCPR. The game will raise

Torquay ranks can be very hard to tion, and will help towards

At a time when new ranks practice, how to recruit,

how to retain and how to

26-27 Portland Bowl Finals have been welcomed at the

London turn your students into a

2-6 Schapiro Spring Foursomes to review its strategy at the or e-mail lisa@ebu.co.uk

Two new ranks have been Tickets are on sale from

Bedfordshire, Hampshire, introduced to provide an outlets around the country

Kent, Warwickshire earlier entry level to the and allow viewers to take

Clubs maintain interest in comfort of their own home.

Richmond, Peterborough questions about the EBU

Bournemouth of the ladder between Club A REMINDER that the EBU

Master (200 LPs) and CLUB FOCUS will be attending the Games

31-1 Jun Corwen Trophy novice players. An additional all our counties and clubs in April 2008. We will present

6&7 Worldwide Sim Pairs All teachers know that have not received a copy, e- teams for Beijing. Do drop

Clubs students love collecting mail: clubfocus@ ebu.co.uk. in between 10.30am and

14-15 Pachabo Cup Master Points. The added The next deadline for 4pm – all bridge and non-

Gloucestershire / ment and encouragement by

Herefordshire the EBU will help Partner

Teachers in particular to THE ‘Proposals for the Future of the EBU’ is now available.

22 One-day events: provide incentives to their Each affiliated club, county and shareholder has been

Bedfordshire, Dorset, students as they evolve from sent a copy. Please read this document along with the

Glos/Herefordshire, Kent, class room to club room. pull-out section of this issue of English Bridge. You can

The new ranks are

Torquay effective from January 2008; offices in Aylesbury for your copy. The future of the EBU

28-29 Oxfordshire Congress a full list of members who and duplicate bridge in England is in your hands. The

Benson have attained them is vote will be taken on 4 June 2008.