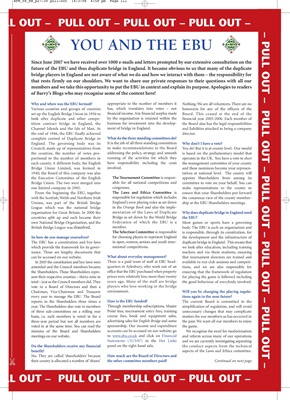 YOU AND THE EBU

future of the EBU and thus duplicate bridge in England. It became obvious to us that many of the duplicate

that rests firmly on our shoulders. We want to share our private responses to their questions with all our

members and we take this opportunity to put the EBU in context and explain its purpose. Apologies to readers

of Barry’s Blogs who may recognise some of the content here!

Why and when was the EBU formed? appropriate to the number of members it Nothing. We are all volunteers. There are no

Various counties and groups of counties has, which translates into votes – not honoraria for any of the officers of the

set up the English Bridge Union in 1936 to financial income. Any financial surplus made Board. This ceased at the end of the

look after duplicate and other compe- by the organisation is retained within the financial year 2005-2006. Each member of

tition contract bridge in England, the business for investment into the develop- the Board also has the legal responsibilities

Channel Islands and the Isle of Man. At ment of bridge in England. and liabilities attached to being a company

the end of 1946, the EBU finally achieved director.

complete control of Duplicate Bridge in What do the three standing committees do?

England. The governing body was its It is the job of all three standing committees Why don’t I have a vote?

Council, made up of representatives from to make recommendations to the Board You do! But it is at county level. Our model

the counties, the number of votes pro- addressing the policy, strategy and smooth is based on the parliamentary model that

portional to the number of members in running of the activities for which they operates in the UK. You have a vote to elect

each county. A different body, the English have responsibility including the costs the management committee of your county

Bridge Union Limited, was formed in involved. and these nominees become your represen-

1940; the Board of this company was also tatives at national level. The county will

Bridge Union. The two were merged into sible for all national competitions and committee to vote on your behalf. You can

one limited company in 2005. congresses. make representations to the county to

From the beginning the EBU, together The Laws and Ethics Committee is ensure that your Shareholders put forward

with the Scottish, Welsh and Northern Irish responsible for regulation which includes the consensus view of the county member-

Unions, was part of the British Bridge England’s own playing rules as set down ship at the EBU Shareholders meetings.

organisation for Great Britain. In 2000 the mentation of the Laws of Duplicate Why does duplicate bridge in England need

countries split up and each became their Bridge as set down by the World Bridge the EBU?

own National Bridge Organisation, and the Federation of which the EBU is a Most games or sports have a governing

British Bridge League was dissolved. member. body. The EBU is such an organisation and

So how do you manage yourselves? for choosing players to represent England the development and the infrastructure of

The EBU has a constitution and bye-laws in open, women, seniors and youth inter- duplicate bridge in England. This means that

which provide the framework for its gover- national competitions. we look after education, including training

nance. These are lengthy documents that teachers and via them students, ensuring

can be accessed on our website. What about everyday management? that tournament directors are trained and

amended and the Council members became quarters in Aylesbury, who work out of an tions, and we are also responsible for

the Shareholders. These Shareholders repre- office that the EBU purchased when property ensuring that the framework of regulation

sent their respective counties – thirty-nine in prices were relatively low, more than twenty for playing the game is followed including

total – just as the Council members did. They years ago. Many of the staff are bridge the good behaviour of everybody involved.

Chairman, Vice-Chairman and Treasurer environment. Will you be changing the playing regula-

every year to manage the EBU. The Board tions again in the near future?

reports to the Shareholders three times a How is the EBU funded? The current Board is committed to the

year. The Shareholders also vote in members Through membership subscriptions, Master simplification of regulation, and will avoid

basis, i.e. each members is voted in for a course fees, book and equipment sales, matters for our members as has occurred in

three-year period but not all members are advertising sales for English Bridge and some the past. We want all our members to enjoy

voted in at the same time. You can read the sponsorship. Our income and expenditure the game.

minutes of the Board and Shareholders accounts can be accessed on our website; go We recognise the need for modernisation

meetings on our website. to www.ebu.co.uk and click on Financial and reform across many of our operations

Do the Shareholders receive any financial panel on the right-hand side. the conduct aspects from the technical

benefit? aspects of the Laws and Ethics committee.

No. They are called ‘shareholders’ because How much are the Board of Directors and

their county is allocated a number of ‘shares’ the other committee members paid? Continued on next page