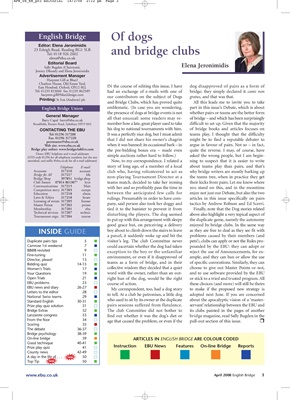 East Hendred, Oxford, OX12 8LL IN the course of editing this issue, I have dog disapproved of pairs as a form of

our contributors on the subject of Dogs gratus, and that was that.

and Bridge Clubs, which has proved quite All this leads me to invite you to take

English Bridge Union emblematic. (In case you are wondering, part in this issue’s Debate, which is about

all that unusual: some readers may re- of bridge – and which has been surprisingly

Broadfields, Bicester Road, Aylesbury HP19 8AZ member how a late, great player used to take difficult to set up. Given that the majority

CONTACTING THE EBU his dog to national tournaments with him. of bridge books and articles focuses on

Web site: www.ebu.co.uk when it was banned: its occasional bark – in argue in favour of pairs. Not so – in fact,

Bridge play online: www.bridgeclublive.com the pre-bidding boxes era – made even quite the reverse. I may, of course, have

(STD code 01296 for all telephone numbers, bar the one simple auctions rather hard to follow.) asked the wrong people, but I am begin-

asterisked, and suffix @ebu.co.uk for all e-mail addresses) Now, to my correspondence. I related a ning to suspect that it is easier to write

Telephone E-mail story of long ago, of a member of a local about teams play than pairs, and that’s

Accounts 317210 account club who, having volunteered to act as why bridge writers are mostly barking up

Bridge Shop 397851 bridge.shop non-playing Tournament Director at a the teams tree, when in practice they get

Club liaison 07814 861307* krys teams match, decided to take her ironing their kicks from pairs. Let me know where

Communications 317215 Matt with her and so profitably pass the time in you stand on this, and in the meantime

Education 317218 ebuta between the anticipated few calls for enjoy not just our Debate, but also the two

Laws & Ethics 317218 lecsec rulings. Presumably in order to have com- articles in this issue specifically on pairs

Membership 317201 ebu tied it to the banister to prevent it from Finally, note that the Dog stories related

disturbing the players. The dog seemed above also highlight a very topical aspect of

to put up with this arrangement with sleepy the duplicate game, namely the autonomy

good grace but, on perceiving a delivery enjoyed by bridge clubs. In the same way

INSIDE GUIDE boy about to climb down the stairs to leave

a parcel, it suddenly woke up and bit the

as they are free to deal as they see fit with

problems caused by their members (and

Camrose 1st weekend 7 could ascertain whether the dog had taken pounded by the EBU: they can adopt or

BB@B revisited 9 exception to the boy or the unfamiliar reject the use of Announcements, for ex-

environment, or even if it disapproved of ample, and they can ban or allow the use

Bidding quiz 14-15 teams as a form of bridge, and in their of specific conventions. Similarly, they can

Women’s Trials 17 collective wisdom they decided that a quiet choose to give out Master Points or not,

Your Questions 19 word with the owner, rather than an out- and to use software provided by the EBU

Open Trials 21 right ban of the dog, would be the right or stick to a tried and trusted program. All

EBU problems 23 course of action. these choices (and more) will still be theirs

EBU news and diary 26-27 My correspondent, too, had a dog story to make if the proposed new strategy is

Letters to the editor 28

to tell. At a club he patronises, a little dog adopted next June. If you are concerned

Lanzarote congress 33 find out whether it was the dog’s diet or bridge magazine, read Sally Bugden in the

From the floor 34 age that caused the problem, or even if the pull-out section of this issue.