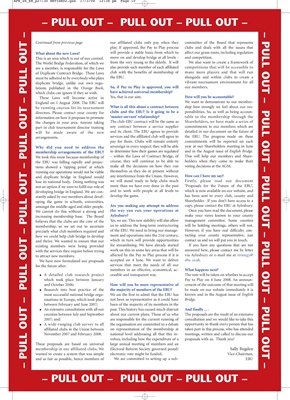 play. If approved, the Pay to Play process clubs and deals with all the issues that

What about the new Laws? will provide a stable basis from which to affect our grass-roots, including regulation

This is an area which is out of our control. move on and develop bridge at all levels - and competition.

The World Bridge Federation, of which we from the very young to the elderly. It will We also want to create a framework of

are a member, is responsible for the Laws also provide each member of each affiliated competitions that will be accessible to

of Duplicate Contract Bridge. These Laws club with the benefits of membership of many more players and that will run

must be adhered to by everybody who plays the EBU. alongside and within clubs to create a

duplicate bridge, unlike our own regu- vibrant tournament environment for all

lations published in the Orange Book, So, if Pay to Play is approved, you will our members.

which clubs can ignore if they so wish. have achieved universal membership?

These Laws will become active in Yes, that is our aim. How will you be accountable?

England on 1 August 2008. The EBU will We want to demonstrate to our member-

directors. Please contact your county for clubs and the EBU? Is it going to be a ponsibilities. So, as well as being accoun-

information on how it proposes to promote ‘master-servant’ relationship? table to the membership through the

the changes in your area. Anyone taking The club-EBU contract will be the same as Shareholders, we have made a series of

will be made aware of the new and its client. The EBU agrees to provide detailed in our document on the future of

arrangements. services and the affiliated club will agree to the EBU. The progress made on these

pay for them. Clubs will remain entirely commitments will be reported on each

Why did you need to address the sovereign in every respect: they will be able year at our Shareholders meeting in June

membership arrangements of the EBU? to determine how their games are regulated and in the August issue of English Bridge.

We took this route because membership of – within the Laws of Contract Bridge, of This will help our members and Share-

the EBU was falling rapidly and projec- course; they will continue to be able to holders when they come to make their

tions showed a ‘tipping point’ at which make all the decisions on how they run voting decisions at the AGM.

and duplicate bridge in England would any interference from the Union. However, How can I have my say?

lose its national body. Doing nothing was we will stand ready to help clubs much Firstly, please read our document

not an option if we were to fulfil our role of more than we have ever done in the past ‘Proposals for the Future of the EBU’,

developing bridge in England. We are con- and to work with people at all levels to which is now available on our website, and

stantly asked by our members about devel- develop the game. has been sent to every club, county and

oping the game in schools, universities, Shareholder. If you don’t have access to a

amongst the middle-aged and older people. Are you making any attempt to address copy, please contact the EBU at Aylesbury.

We cannot do this without a strong and the way you run your operations at Once you have read the document, please

increasing membership base. The Board Aylesbury? make your views known to your county

believes that the clubs are the core of the Yes, we are. This new stability will also allow management committee. Some counties

membership, so we set out to ascertain us to address the long-term restructuring will be holding meetings, others will not.

precisely what club members required and of the EBU. We need to bring our manage- However, if you have real difficulty con-

how we could help club bridge to develop ment and operations into the 21st century, tacting your county representative, just

and thrive. We wanted to ensure that our which in turn will provide opportunities contact us and we will put you in touch.

existing members were being provided for streamlining. We have already started If you have any questions that are not

with the services they require before trying work on this in some key areas that will be answered here, please contact me by letter

to attract new members. affected by the Pay to Play process if it is via Aylesbury or e-mail me at strategy@

We have now formulated our proposals accepted on 4 June. We want to deliver ebu. co.uk.

for the future after: services that meet the needs of all our

members in an effective, economical, ac- What happens next?

which took place between January

cessible and transparent way. The vote will be taken on whether to accept

and October 2006; How will you be more representative of cement of the outcome of that meeting will

• Research into best practice of the

the majority of members of the EBU?

We are the first to admit that the EBU has

known and in the August issue of English

nisations in Europe, which took place not been as representative as it could have Bridge.

between February and June 2007; been of the majority of its members in the

• An extensive consultation with all our

counties between July and September

past. This history has caused much distrust

about our current plans. Those of us who

The proposals are the result of an extensive

2007; and: are responsible for the current running of consultation and we would like to take this

• A wide-ranging club survey to all

affiliated clubs in the Union between

the organisation are committed to a debate

on representation of the membership at

opportunity to thank every person that has

taken part in this process, who has attended

November 2007 and February 2008. national level addressing all that this in- meetings, written and called to discuss our

volves, including how the expenditure of a proposals with us. Thank you!

wanted to create a system that was simple electronic vote might be funded. Vice-Chairman,

and as fair as possible, hence members of We are committed to setting up a sub- EBU