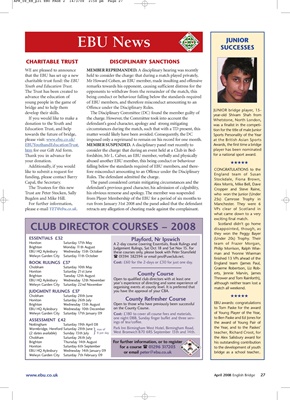 WE are pleased to announce MEMBER REPRIMANDED. A disciplinary hearing was recently

that the EBU has set up a new held to consider the charge: that during a match played privately,

Youth and Education Trust. remarks towards his opponent, causing sufficient distress for the

The Trust has been created to opponents to withdraw from the remainder of the match, this

young people in the game of of EBU members, and therefore misconduct amounting to an

bridge and to help them Offence under the Disciplinary Rules.

develop their skills. The Disciplinary Committee (DC) found the member guilty of year-old Shivam Shah from

If you would like to make a the charge. However, the Committee took into account the Whetstone, North London,

donation to the Youth and defendant’s good character, apology and strong mitigating was a finalist in the competi-

Education Trust, and help circumstances during the match, such that with a TD present, this tion for the title of male Junior

towards the future of bridge, matter would likely have been avoided. Consequently, the DC Sports Personality of the Year

please visit: www.ebu.co.uk/ imposed only a reprimand to remain on his record for one month. at the British Asian Sports

htm for our Gift Aid form. consider the charge: that during an event held at a Club in Bed- player has been nominated

Thank you in advance for fordshire, Mr L. Calver, an EBU member, verbally and physically for a national sport award.

your donation. abused another EBU member, this being conduct or behaviour 55555

Additionally, if you would falling below the standards required of EBU members, and there-

The Trustees for this new defendant’s previous good character, his admission of culpability, Cropper and Steve Raine,

Trust are Peter Stocken, Sally his obvious remorse and apology. The member was suspended who won the Junior (Under

Bugden and Mike Hill. from Player Membership of the EBU for a period of six months to 25s) Camrose Trophy in

For further information, run from January 31st 2008 and the panel asked that the defendant Manchester. They were 6

please e-mail YET@ebu.co.uk. retracts any allegation of cheating made against the complainant. VPs clear of Scotland in

what came down to a very

CLUB DIRECTOR COURSES – 2008 disappointed, though, as

they won the Peggy Bayer

Open to qualified club directors with at least one Thrower and Tom Rainforth),

organising events at county level. It is preferred that match all weekend.

JUDGMENT RULINGS £37 you have the approval of your CBA.

Brighton Wednesday 13th August Open to those who have previously been successful EBU awards: congratulations

EBU HQ Aylesbury Wednesday 10th December on the County Course. to Tom Paske for the award

80 of Young Player of the Year,

one night DBB, Sunday finger buffet and three serv- to Ben Paske and Ed Jones for

Nottingham Saturday 19th April 08 the award of Young Pair of

Brighton Thursday 14th August For further information, or to register his outstanding contribution