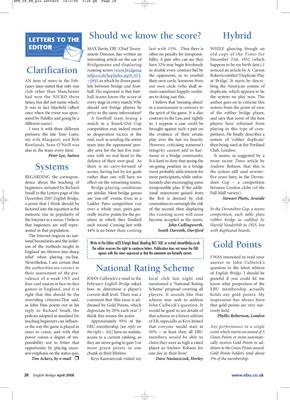 Should we know the score? Hybrid

EDITOR MAX Bavin, EBU Chief Tourn- last with 15%. Thus there is WHILE glancing though an

ament Director, has written an often no penalty for irresponsi- old copy of the Times for

interesting article on the use of bility. A pair who can see they December 21st, 1932 (which

Bridgemates and displaying have 32% may begin frivolously happens to be my birth date), I

to double every contract bid by

the opponents, or to overbid

noticed an article by A. Carson

AN item of news in the Feb- =0#9), in which he draws paral- their own cards. Someone from at Bridge’. It starts by descri-

club other than Manchester ball. His argument is that foot- main nameless) happily confes- duplicate, which appears to be

had won the NICKO three ball teams know the score at ses to doing just this. the system we play now. The

times, but did not name which. every stage in every match. Why I believe that ‘messing about’ author goes on to criticise this

once when the event was spon- privy to the same information? the spirit of the game. It is also of the rubber bridge player,

sored by Fidelity and going by a A football team losing a contrary to the Law, and rightly and says that some of the best

different name). match in a Knock-Out Cup so. I suppose a case could be players have refrained from

partners: the late Tony Lunn, to desperation tactics at the the evidence of their erratic petition. He finally describes a

my wife Margaret, and Bob end, such as sending the entire play over the last six boards. system of ‘rubber duplicate’

Rowlands. Sean O'Neill was team into the opponents’ pen- However, criticising someone’s then being used at the Portland

also in the team every time. alty area for the last five min- integrity cannot add to har- Club, London.

Peter Lee, Sutton utes with no real heed to the mony in a bridge community. It seems, as suggested by a

defence of their own goal. As It is hard to deny that seeing the more recent Times article by

Systems there is no carry-forward of

scores, having lost by ten goals

on-going position in a bridge

Andrew Robson, that this is

REGARDING the correspon- rather than one will have no most participants, while unfor- five years later, in the Devon-

dence about the teaching of effect on the remaining teams. tunately also encouraging some shire Cup – a competition

beginners, initiated by Richard Bridge-playing conditions irresponsible play. If the addit- between London clubs (of the

Small in the Letters page of the are similar. Most bridge games ional enjoyment gained from Pall Mall variety).

December 2007 English Bridge, are ‘one-off’ events. Even in a the first is deemed by club Stewart Platts, Arnside

factored into the equation is the over a whole year, pairs gen- of the second, then displaying In the Devonshire Cup, a teams

meteoric rise in popularity of erally receive points for the po- the running score will soon competition, each table plays

the Internet as a venue. I believe sition in which they finished become accepted as the norm. rubber bridge as codified by

that beginners are well repre- each round. Coming last with John Cullingworth, Harold Vanderbilt in 1925, but

sented in that population. 44% is no better than coming South Darenth, Dartford with duplicated boards.

The Internet respects no nat-

ional boundaries and the isolat-

ion of the methods taught in

Write to the Editor at23 Erleigh Road, Reading RG1 5LR, or e-mail elena@ebu.co.uk

The editor reserves the right to condense letters. Publication does not mean the EBU

England are thrown into sharp agrees with the views expressed or that the comments are factually correct.

relief when playing on-line. I WAS interested to read your

Nevertheless, I am certain that answer to John Cullwick’s

the authorities are correct in

their assessment of the pre-

of English Bridge. I should be

games in England, and it is how to determine a player’s Scheme’ proposal covering all EBU membership actually

right that this should be the current skill level. There was a players. It sounds like that holds any gold points. My

overriding criterion.That said, comment that ‘this issue is ad- scheme may seek to address impression has always been

as John Pain points out in his dressed by Gold Points, which John Cullwick’s question. It that gold points are very nar-

reply to Richard Small, the depreciate by 20% each year’. I would be good to see details of rowly held.

policies adopted as standard for think this misses the point. that scheme in a future edition Phyllis Robertson, London

teaching beginners can influen- Approximately 95% of the of EB, especially as Krys hinted

years to come, and with that the right – Ed.] have no realistic 50% – at least then all EBU event which merits an award of 5

power comes a degree of res- access to a current ranking, as members would be able to Green Points or more automati-

opportunity by placing exces- more green points in one player as Andrew Robson for dition to the Green Points award.

sive emphasis on the status quo. chunk in their lifetime. one day in their lives! Gold Points holders total about