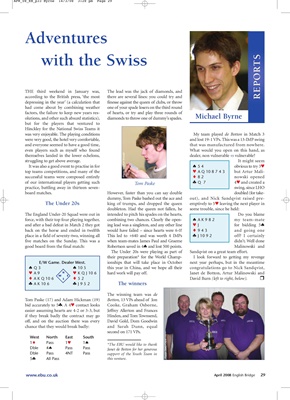 THE third weekend in January was, The lead was the jack of diamonds, and

according to the British press, ‘the most there are several lines: you could try and

depressing in the year’ (a calculation that finesse against the queen of clubs, or throw

factors, the failure to keep new years res- of hearts, or try and play three rounds of

olutions, and other such absurd statistics), diamonds to throw one of dummy’s spades. Michael Byrne

but for the players that ventured to

Hinckley for the National Swiss Teams it

was very enjoyable. The playing conditions My team played de Botton in Match 3

were very good, the hotel very comfortable, and lost 19-1 VPs. This was a 13-IMP swing

and everyone seemed to have a good time, that was manufactured from nowhere.

even players such as myself who found What would you open on this hand, as

themselves landed in the lower echelons, dealer, non vulnerable vs vulnerable?

practice, battling away in thirteen seven- swing, since LHO

board matches. However, faster than you can say double doubled (for take-

dummy, Tom Paske bashed out the ace and out), and Nick Sandqvist raised pre-

The Under 20s king of trumps, and dropped the queen emptively to 5♥ leaving the next player in

doubleton. Had the queen not fallen, he some trouble, since he held:

The England Under-20 Squad were out in intended to pitch his spades on the hearts, Do you blame

force, with their top four playing together, combining two chances. Clearly the open- ♠AK982 my team-mate

and after a bad defeat in Match 2 they got ing lead was a singleton, and any other line ♥J for bidding 5♠

back on the horse and ended in twelfth would have failed – since hearts were 6-0! ♦943 and going one

five matches on the Sunday. This was a when team-mates James Paul and Graeme didn’t. Well done

good board from the final match: Robertson saved in 4♠ and lost 500 points. Malinowski and

The Under 20s were playing as part of Sandqvist on a great team effort.

E/W Game. Dealer West. ionships that will take place in October next year perhaps, but in the meantime

♠ Q3 ♠ 10 5 this year in China, and we hope all their congratulations go to Nick Sandqvist,

The winning team was de

easier assuming hearts are 4-2 or 3-3, but Jeffrey Allerton and Frances

if they break badly the contract may go Hinden, and Tom Townsend,

off, and on the auction there was every David Gold, Dom Goodwin

chance that they would break badly: and Sarah Dunn, equal

Dble Pass 4NT Pass support of the Youth Team in

5♣ All Pass this venture.