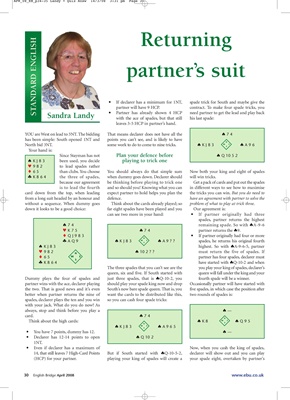 • If declarer has a minimum for 1NT, spade trick for South and maybe give the

partner will have 9 HCP. contract. To make four spade tricks, you

with the ace of spades, but that still his last spade:

YOU are West on lead to 3NT. The bidding That means declarer does not have all the ♠74

has been simple: South opened 1NT and points you can’t see, and is likely to have N

♠KJ83 been used, you decide playing to trick one

♦65 than clubs. You choose You should always do that simple sum Now both your king and eight of spades

♣K864 the three of spades, when dummy goes down. Declarer should will win tricks.

is to lead the fourth and so should you! Knowing what you can in different ways to see how to maximise

card down from the top, when leading expect partner to hold helps you plan the the tricks you can win. But you do need to

from a long suit headed by an honour and defence. have an agreement with partner to solve the

without a sequence. When dummy goes Think about the cards already played; so problem of what to play at trick three.

down it looks to be a good choice: far eight spades have been played and you Our agreement is:

can see two more in your hand: • If partner originally had three

♦ QJ983 N • If partner originally had four or more

♠A9?? spades, he returns his original fourth

The three spades that you can’t see are the you play your king of spades, declarer’s

queen, six and five. If South started with queen will fall under the king and your

Dummy plays the four of spades and just three spades, that is ♠Q-10-2, you fourth spade will be a winner.

partner wins with the ace, declarer playing should play your spade king now and drop Occasionally partner will have started with

the two. That is good news and it’s even South’s now bare spade queen. That is, you five spades, in which case the position after

better when partner returns the nine of want the cards to be distributed like this, two rounds of spades is:

spades, declarer plays the ten and you win so you can cash four spade tricks:

with your jack. What do you do now? As

always, stop and think before you play a ♠—

Think about the high cards: N

• Even if declarer has a maximum of Now, when you cash the king of spades,

14, that still leaves 7 High-Card Points But if South started with ♠Q-10-5-2, declarer will show out and you can play

(HCP) for your partner. playing your king of spades will create a your spade eight, overtaken by partner’s