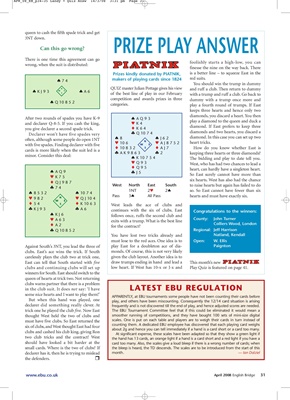 queen to cash the fifth spade trick and get

Can this go wrong?

There is one time this agreement can go

PRIZE PLAY ANSWER foolishly starts a high-low, you can

wrong, when the suit is distributed:

finesse the nine on the way back. There

Prizes kindly donated by PIATNIK, is a better line – to squeeze East in the

You should win the trump in dummy

N QUIZ master Julian Pottage gives his view and ruff a club. Then return to dummy

♠A6 of the best line of play in our February with a trump and ruff a club. Go back to

diamonds, you discard a heart. You then

play a diamond to the queen and duck a

you give declarer a second spade trick.

often, although some people do open 1NT N

cards is more likely when the suit led is a

♥Q93 West, who has had two chances to lead a

♦Q95 heart, can hardly have a singleton heart.

♠ AQ9 ♣J5 So East surely cannot have more than

six hearts. West has also had the chance

Pass 3♠ All Pass hearts and must have exactly six.

♣ KJ93 ♣ A6 continues with the six of clubs. East Congratulations to the winners:

♠ KJ6 follows once, ruffs the second club and

exits with a trump. What is the best line

You have lost two tricks already and Natland, Kendall

must lose to the red aces. One idea is to Open: W. Ellis

Against South’s 3NT, you lead the three of play East for a doubleton ace of dia- Paignton

clubs. East’s ace wins the trick. If South monds. Of course, this is not very likely

carelessly plays the club two at trick one, given the club layout. Another idea is to

clubs and continuing clubs will set up low heart. If West has 10-x or J-x and Play Quiz is featured on page 41.

winners for South. East should switch to the

queen of hearts at trick two. Not returning

clubs warns partner that there is a problem

in the club suit. It does not say: ‘I have LATEST EBU REGULATION

some nice hearts and I want to play them!’ APPARENTLY, at EBU tournaments some people have not been counting their cards before

But when this hand was played, one play, and others have been miscounting. Consequently the 12/14 card situation is arising

declarer did something really clever. At frequently and is not discovered till the end of play, and hence adjusted scores are needed.

trick one he played the club five. Now East The EBU Tournament Committee feel that if this could be eliminated it would mean a

thought West held the two of clubs and smoother running of competitions, and they have bought 100 sets of mini-size digital

must have five clubs. So East returned the scales. One is put on each table and players are to weigh their cards in turn instead of

counting them. A dedicated EBU employee has discovered that each playing card weighs

six of clubs, and West thought East had four

about 2g and hence you can tell immediately if a hand is a card short or a card too many.

clubs and cashed his club king, giving Ron At significant expense, these scales have been adapted so that they show a green light if

two club tricks and the contract! West the hand has 13 cards, an orange light if a hand is a card short and a red light if you have a

should have looked a bit harder at the card too many. Also, the scales give a loud bleep if there is a wrong number of cards; when

small cards. Where is the two of clubs? If the bleep is heard, the TD descends. The scales are to be introduced from the start of this

declarer has it, then he is trying to mislead month. — Ian Dalziel