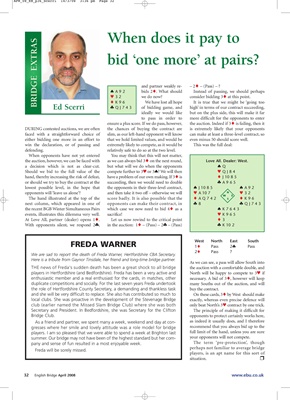 When does it pay to

bid ‘one more’ at pairs?

♠ A92 bids 2♦. What should Instead of passing, we should perhaps

Ed Scerri ♣ QJ743 of bidding game, and high’ in terms of our contract succeeding,

ideally we would like but on the plus side, this will make it far

ensure a plus score. If we do pass, however, the auction. Indeed if 3♦ is failing, then it

DURING contested auctions, we are often the chances of buying the contract are is extremely likely that your opponents

faced with a straightforward choice of slim, as our left-hand opponent will know can make at least a three-level contract, so

either bidding one more in an effort to that we hold limited values, and would be even minus 50 should score well.

win the declaration, or of passing and extremely likely to compete, as it would be This was the full deal:

defending. relatively safe to do so at the two level.

When opponents have not yet entered You may think that this will not matter,

the auction, however, we can be faced with as we can always bid 3♦ on the next round, Love All. Dealer: West.

a decision which is not as clear-cut. but what will we do when the opponents ♠Q

or should we try to buy the contract at the succeeding, then we would need to double ♣A965

lowest possible level, in the hope that the opponents in their three-level contract, ♠ J 10 8 5 ♠A92

The hand illustrated at the top of the score badly. It is also possible that the ♦ AQ742 S ♦K96

next column, which appeared in one of opponents can make their contract, in ♣ 8 ♣QJ743

At Love All, partner (dealer) opens 1♦. Let us now rewind to the critical point ♦3

We are sad to report the death of Freda Warner, Hertfordshire CBA Secretary.

Here is a tribute from Gaynor Tinsdale, her friend and long-time bridge partner.

As we can see, a pass will allow South into

THE news of Freda's sudden death has been a great shock to all bridge the auction with a comfortable double, and

players in Hertfordshire (and Bedfordshire). Freda has been a very active and North will be happy to compete to 3♥ if

enthusiastic member and a real enthusiast for the cards, in matches, other necessary. A bid of 3♦, however will keep

duplicate competitions and socially. For the last seven years Freda undertook many Souths out of the auction, and will

the role of Hertfordshire County Secretary, a demanding and thankless task buy the contract.

and she will be very difficult to replace. She also has contributed so much to On these cards, 3♦ by West should make

local clubs. She was proactive in the development of the Stevenage Bridge exactly, whereas even precise defence will

club (earlier named the Missed Slam Bridge Club) where she was both only beat North’s 3♥ contract by one trick.

Secretary and President. In Bedfordshire, she was Secretary for the Clifton The principle of making it difficult for

As a friend and partner, we spent many a week, weekend and day at con- as indeed it usually does, and I therefore

players. I am so pleased that we were able to spend a week at Brighton last full limit of the hand, unless you are sure

summer. Our bridge may not have been of the highest standard but her com- your opponents will not compete.

pany and sense of fun resulted in a most enjoyable week. The term ‘pre-protection’, though

perhaps not familiar to average bridge

Freda will be sorely missed.

players, is an apt name for this sort of