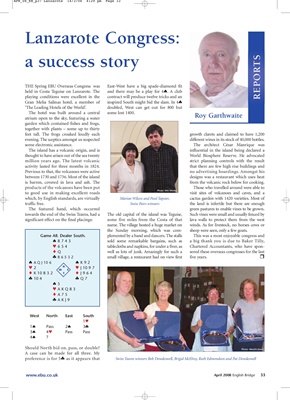 held in Costa Teguise on Lanzarote. The and there may be a play for 4♠. A club

Gran Melia Salinas hotel, a member of inspired South might bid the slam. In 4♠

‘The Leading Hotels of the World’. doubled, West can get out for 800 but

The hotel was built around a central some lost 1400.

atrium open to the sky, featuring a water Roy Garthwaite

garden which contained fishes and frogs,

together with plants – some up to thirty

feet tall. The frogs croaked loudly each growth clarets and claimed to have 1,200

evening. The sceptics amongst us suspected different wines in its stock of 40,000 bottles.

some electronic assistance. The architect César Manrique was

The island has a volcanic origin, and is influential in the island being declared a

thought to have arisen out of the sea twenty World Biosphere Reserve. He advocated

million years ago. The latest volcanic strict planning controls with the result

activity lasted for three months in 1824. that there are few high rise buildings and

Previous to that, the volcanoes were active no advertising hoardings. Amongst his

between 1730 and 1736. Most of the island designs was a restaurant which uses heat

is barren, covered in lava and ash. The from the volcanic rock below for cooking.

to good use in making excellent roads visit sites of volcanoes and caves, and a

which, by English standards, are virtually Marian Wilcox and Paul Tapster, cactus garden with 1420 varieties. Most of

traffic free. Swiss Pairs winners the land is infertile but there are enough

The featured hand, which occurred green pastures to enable vines to be grown.

towards the end of the Swiss Teams, had a The old capital of the island was Teguise, Such vines were small and usually fenced by

significant effect on the final placings: some five miles from the Costa of that lava walls to protect them from the west

name. The village hosted a huge market on winds. As for livestock, no horses cows or

the Sunday morning, which was com- sheep were seen, only a few goats.

Game All. Dealer South. plemented by a band and dancers. The stalls This was a most enjoyable congress and

♠8743 sold some remarkable bargains, such as a big thank you is due to Baker Tilly,

♥654 tablecloths and napkins, for under a fiver, as Chartered Accountants, who have spon-

♦Q well as lots of junk. Amazingly for such a sored these overseas congresses for the last

♣86532 small village, a restaurant had on view first five years.

Should North bid on, pass, or double? Photo: Marylin Jones

A case can be made for all three. My

preference is for 5 ♣ as it appears that Swiss Teams winners Bob Dowdeswell, Brigid McElroy, Ruth Edmondson and Pat Dowdeswell