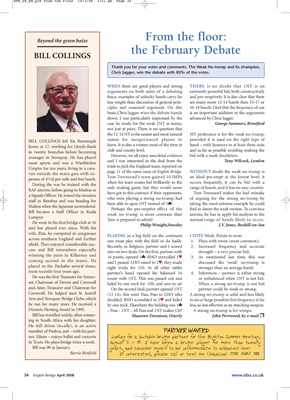 Beyond the green baize From the floor:

Thank you for your votes and comments. The Weak No-trump and its champion,

Chris Jagger, win the debate with 83% of the votes.

arguments on both sides of a debating extremely powerful bid, both constructively

fence, examples of unlucky hands carry far and pre-emptively. It is also clear that there

ciples and reasoned argument. On this 16-18 hands. I feel that the frequency of use

basis, Chris Jagger wins the debate hands is an important addition to the arguments

down. I was particularly impressed by the advanced by Chris Jagger.

case he made for the weak 1NT at teams, George Summers, Brentford

not just at pairs. There is no question that

the 12-14 NT is the easiest and most natural MY preference is for the weak no-trump,

home at 17, working for Lloyds Bank learn. It is also a winner most of the time at hand – with honours in at least three suits

in twenty branches before becoming club and county level. and as far as possible avoiding making the

manager in Newquay. He has played However, we all enjoy anecdotal evidence bid with a weak doubleton.

most sports and was a Wimbledon and I was interested in the deal from the Tony Wilcock, London

Umpire for ten years, living in a cara- trials to pick the England team, reported on

van outside the main gate with ex- page 11 of the same issue of English Bridge. WITHOUT doubt the weak no-trump is

Tom Townsend’s team gained 10 IMPs an ideal pre-empt at the lowest level: it

penses of 41/2d per mile and free lunch.

when his team-mates bid brilliantly to the occurs frequently, it can be bid with a

During the war he trained with the

only making game, but they would never range of hands, and it has no easy counter.

RAF aircrew, before going to Madras as

have got to this contract if their opponents, Tom Townsend makes the bad mistake

a Signals Officer. He joined the invasion

staff in Bombay and was heading for

been able to open 1NT instead of 1♣! taking the most extreme example he could

Malaya when the Japanese surrendered.

Perhaps the pre-emptive effect of the find to damn the weak version. To convince

weak no-trump is more common than anyone, he has to apply his analysis to the

Tom is prepared to admit? normal range of hands likely to occur.

He went to his first bridge club at 16

and has played ever since. With his

wife, Rita, he competed in congresses PLAYING in a big field on the continent I VOTE Weak. Points to note:

across southern England and further one must play with the field or do badly. 1. Plays with room (most common);

afield. They enjoyed considerable suc- Recently, in Belgium. partner and I scored 2. Increased frequency and accurate

cess and Bill remembers especially zero on two deals. On the first, partner, with strength – a very precise bid;

winning the pairs in Killarney and 16 points, opened 1♣. RHO overcalled 1♥ 3. As mentioned last time this was

coming second in the teams. He and I passed. LHO raised to 2♥; they made discussed the ‘weak’ no-trump is

played in the Pachabo several times, eight tricks for 110. At all other tables stronger than an average hand;

most recently four years ago. partner’s hand opened his balanced 16 4. Inferences – partner is either strong

He was the first Treasurer for Somer- count with 1NT. This was passed out and or unbalanced when 1NT is not bid.

set, Chairman of Devon and Cornwall failed by one trick for -100, and zero to us! When a strong no-trump is not bid

and, later, Treasurer and Chairman for On the second deal, partner opened 1NT partner could be weak or strong.

Cornwall. He helped start St Austell (12-14); this went Pass, Pass to LHO who A strong no-trump is solid and less likely

Arts and Newquay Bridge Clubs, which doubled. RHO scrambled to 2♥ and failed to incur large penalties but frequency is far

he ran for many years. He received a by one trick. Elsewhere the bidding was 1♣ less, so less effective as an attacking weapon.

ing in South Africa with his daughter.

He still drives (locally), is an active

member of Probus, and – with his part- PARTNER WANTED

in Truro. He plays bridge twice a week. August 11 - 15. I have been a bridge player for more than twenty

Bill was 99 in January. years, and consider myself to be intermediate to advanced level.