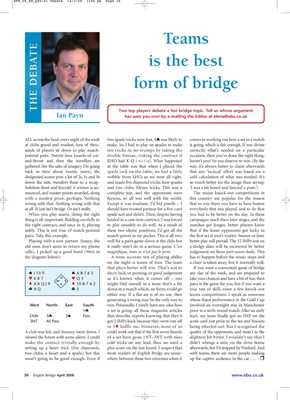 Ian Payn has won you over by e-mailing the Editor at elena@ebu.co.uk

ALL across the land, every night of the week two spade tricks were lost, 4♠ was likely to comes to working out how a set in a match

at clubs grand and modest, tens of thou- make. So, I had to play on spades to make is going, which is fair enough. If you divine

and-thrust and then the travellers are RHO had K-Q (-x) (-x). What happened haven’t you? So you deserve to win. (By the

gathered (for the sake of imagery I’m going at the table was that when I placed the way, it’s always better to claim afterwards

back in time about twenty years), the spade jack on the table, we had a little that any ‘tactical’ effort was based on a

designated scorer puts a lot of 2s, 1s and 0s wobble from LHO, so we were all right, cold calculation of what was needed. It’s

down the side, transfers these to a recap- and made five diamond tricks, four spades so much better for the image than saying:

itulation sheet and hurrah! A winner is an- and two clubs. Eleven tricks. This was a ‘I was a bit bored and fancied a punt.’)

nounced, and master points awarded, along complete top, and the opponents were The major knock-out competitions in

with a modest prize, perhaps. Nothing furious, so all was well with the world. this country are popular for the reason

at all. It just isn’t bridge. Or isn’t really. should have trusted partner for a five-card everybody that you played, and to do that

When you play teams, doing the right spade suit and didn’t. Then, despite having you had to be better on the day. As these

thing is all-important. Bidding carefully to landed in a cast-iron contract, I was forced campaigns reach their later stages, and the

the right contract, and once in it, playing to play unsafely to do well. As a result of matches get longer, better players know

safely. This is not true of match-pointed these two idiotic positions, I’d got all the that if the lesser opponents got lucky in

pairs. Take this example. match-points in my pocket. This is all very the first set it won’t matter. Sooner or later

Playing with a new partner (funny, the well for a pairs game down at the club, but better play will prevail. The 12 IMPs lost on

old ones don’t seem to return my phone it really won’t do in a serious game. C’est a dodgy slam will be recovered by better

the diagram below): A more accurate test of playing ability has to happen before the music stops and

on the night is teams of four. The team a chair is taken away, but it normally will.

that plays better will win. That’s not to If you want a convenient game of bridge

♥ Q3 as it’s known when it comes off – one take your chances and have a bit of fun, then

♣ AQ ♣ 5 down in a match which, on form, could go true test of skill, enter a few knock-out

either way. If a flat set is of no use, then teams competitions. I speak as someone

West North East South win. Personally, I rarely have any idea how involved an overnight stay in Manchester

1♣ a set is going: all those magazine articles prior to a sixth-round match. After an early

Dble 3♣ 3♠ Pass that describe experts knowing that they’d start, my team finally got an IMP on the

in 3 ♦ baffle me. However, most of us being wheeled out. But I recognised the

A club was led, and dummy went down. I could work out that if the first seven boards quality of the opponents, and wasn’t in the

viewed the future with some alarm. I could of a set have gone 1NT–3NT with nine slightest bit bitter. I wouldn’t say that I

make the contact trivially enough by cold tricks on any lead, then we need a didn’t whinge a mite on the drive home

setting up a heart trick (five diamonds, plus score on the last board. I suspect that afterwards, but I’d stopped by Watford. And

two clubs, a heart and a spade) but this most readers of English Bridge are some- with teams, there are more people making

wasn’t going to be good enough. Even if where between these two extremes when it up the captive audience in the car . . .