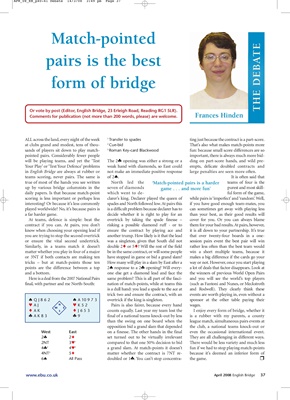 pairs is the best

Comments for publication (not more than 200 words, please) are welcome. Frances Hinden

ALL across the land, every night of the week 1

Transfer to spades ting just because the contract is a part-score.

at clubs grand and modest, tens of thou- 2

sands of players sit down to play match- 3

Roman Key-card Blackwood fun: because small score differences are so

will be playing teams, and yet the ‘Test The 2♣ opening was either a strong or a ding on part-score hands, and wild pre-

Your Play’ or ‘Test Your Defence’ problems weak hand with diamonds, so East could empts, delicate doubled contracts and

in English Bridge are always at rubber or not make an immediate positive response large penalties are seen more often.

teams scoring, never pairs. The same is of 2♠. It is often said that

up by various bridge columnists in the seven of diamonds game . . . and more fun’ purest and most skill-

daily papers. Is that because match-point which went to de- ful form of the game,

scoring is less important or perhaps less clarer’s king. Declarer played the queen of while pairs is ‘imperfect’ and ‘random’. Well,

interesting? Or because it’s less commonly spades and North followed low. At pairs this if you have good enough team-mates, you

played worldwide? No, it’s because pairs is is a difficult problem because declarer has to can sometimes get away with playing less

a far harder game. decide whether it is right to play for an than your best, as their good results will

At teams, defence is simple: beat the overtrick by taking the spade finesse – cover for you. Or you can always blame

contract if you can. At pairs, you don’t risking a possible diamond ruff - or to them for your bad results. At pairs, however,

know when choosing your opening lead if ensure the contract by playing ace and it is all down to your partnership. It’s true

you are trying to stop the second overtrick another trump. How likely is it that the lead that over twenty-four boards in a one-

or ensure the vital second undertrick. was a singleton, given that South did not session pairs event the best pair will win

Similarly, in a teams match it doesn’t double 2♦ or 5♦? Will the rest of the field rather less often than the best team would

matter whether you play in four of a major be in the same contract, or will some people win a short multiple teams, because it

or 3NT if both contacts are making ten have stopped in game or bid a grand slam? makes a big difference if the cards go your

tricks – but at match-points those ten How many will play in a slam by East after a way or not. However, once you start playing

points are the difference between a top 2♠ response to a 2♣ opening? Will every- a lot of deals that factor disappears. Look at

and a bottom. one else get a diamond lead and face the the winners of previous World Open Pairs

Here is a deal from the 2007 National Pairs same problem? This is all part of the fasci- and you will see the world’s top players

final, with partner and me North-South: nation of match-points, while at teams this (such as Fantoni and Nunes, or Meckstroth

is a dull hand: you lead a spade to the ace at and Rodwell). They clearly think these

trick two and ensure the contract, with an events are worth playing in, even without a

♥ K52 Pairs is also fairer, because every hand wages.

♦ AK S ♦ J653 counts equally. Last year my team lost the I enjoy every form of bridge, whether it

♣ AK83 ♣ 9 final of a national teams knock-out by less is a rubber with my parents, a county

than the swing on one board when the league match, simultaneous pairs events at

opposition bid a grand slam that depended the club, a national teams knock-out or

West East on a finesse. The other hands in the final even the occasional international event.

2♣ 2♦ set turned out to be virtually irrelevant They are all challenging in different ways.

4♣2 4♥2 a grand slam. At match-points it doesn’t fun if we had to stop playing match-points