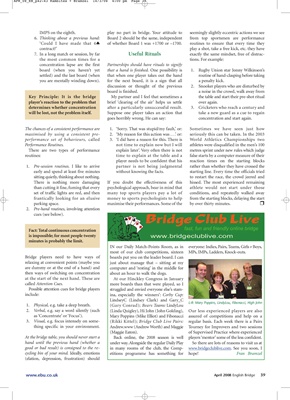 IMPS on the eighth. play no part in bridge. Your attitude to seemingly slightly eccentric actions we see

6. Thinking about a previous hand: Board 2 should be the same, independent from top sportsmen are performance

contract?’ play a shot, take a free kick, etc. they have

7. In a long match or session, by far Useful Rituals exactly the same mindset, free of distrac-

the most common times for a tions. For example:

concentration lapse are the first Partnerships should have rituals to signify

board (when you haven’t yet that a hand is finished. One possibility is 1. Rugby Union star Jonny Wilkinson’s

you are mentally winding down). for the next board, it is a sign that all a penalty kick.

discussion or thought of the previous 2. Snooker players who are disturbed by

board is finished. a noise in the crowd, walk away from

Key Principle: It is the bridge My partner and I feel that sometimes a the table and start their pre-shot ritual

player’s reaction to the problem that brief ‘clearing of the air’ helps us settle over again.

determines whether concentration after a particularly unsuccessful result. 3. Cricketers who reach a century and

will be lost, not the problem itself. Suppose one player takes an action that take a new guard as a cue to regain

goes horribly wrong. He can say: concentration and start again.

The chances of a consistent performance are 1. ‘Sorry. That was stupid/my fault,’ or: Sometimes we have seen just how

performance set of behaviours, called 3. ‘I did have a reason for this. There is World Athletics Championships two

Performance Routines. not time to explain now but I will athletes were disqualified in the men’s 100

There are two types of performance explain later’. Very often there is not metres sprint under new rules which judge

routines: time to explain at the table and a false starts by a computer measure of their

1. Pre-session routines. I like to arrive partner is not being judgmental rather than whether they have crossed the

early and spend at least five minutes without knowing the facts. starting line. Every time the officials tried

sitting quietly, thinking about nothing. to restart the race, the crowd jeered and

There is nothing more damaging If you doubt the effectiveness of this hissed. The most experienced remaining

than cutting it fine, fuming that every psychological approach, bear in mind that athlete would not start under those

set of traffic lights are red, and then many top sports players pay a lot of conditions, and repeatedly walked away

frantically looking for an elusive money to sports psychologists to help from the starting blocks, delaying the start

parking space. maximise their performances. Some of the by over thirty minutes.

is impossible; for most people twenty

minutes is probably the limit.

IN our Daily Match-Points Room, as in everyone: Indies, Pairs, Teams, Girls v Boys,

most of our club competitions, sixteen MPs, IMPs, Ladders, Knock-outs.

Bridge players need to have ways of boards put you on the leader board. I can

then ways of switching on concentration about an hour to walk the dogs.

at the start of the next hand. These are At our Hinckley Congress in January

called Attention Cues. more boards than that were played, so I

as ‘Concentrate’ or ‘Focus’). Mary Poppins (Mike Elliot) and Fibonacci assured of competitions and help on a

3. Visual, e.g. focus intensely on some- (Rikki Kittel); Bridge Club Live Pairs: regular basis. Each week there is a Pairs

thing specific in your environment. Andrew.www (Andrew Worth) and Maggie Tourney for Improvers and two sessions

At the bridge table, you should never start a Back online, the 2008 season is well players ‘mentor’ some of the less confident.

hand until the previous hand (whether a under way. Alongside the regular Daily Play So there are lots of reasons to visit us at

good or bad result) is consigned to the re- in many rooms of the club, the Comp- www.bridgeclublive.com. See you soon, I

cycling bin of your mind. Ideally, emotions etitions programme has something for hope! Fran Bramzel