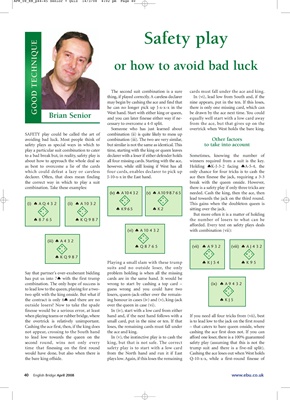 or how to avoid bad luck

The second suit combination is a sure cards must fall under the ace and king.

thing, if played correctly. A careless declarer In (vi), lead low from South and, if the

may begin by cashing the ace and find that nine appears, put in the ten. If this loses,

he can no longer pick up J-x-x-x in the there is only one missing card, which can

West hand. Start with either king or queen, be drawn by the ace next time. You could

cessary to overcome a 4-0 split. from the ace, but that gives up on the

Someone who has just learned about overtrick when West holds the bare king.

avoiding bad luck. Most people think of combination (iii). The two are very similar, Other factors

safety plays as special ways in which to but similar is not the same as identical. This to take into account

play a particular suit combination to cater time, starting with the king or queen leaves

to a bad break but, in reality, safety play is declarer with a loser if either defender holds Sometimes, knowing the number of

about how to approach the whole deal so all four missing cards. Starting with the ace, winners required from a suit is the key.

as best to overcome a lie of the cards however, while still losing if West has all Holding ♠K-J-3-2 facing ♠A-5-4, the

which could defeat a lazy or careless four cards, enables declarer to pick up only chance for four tricks is to cash the

declarer. Often, that does mean finding J-10-x-x in the East hand. ace then finesse the jack, requiring a 3-3

the correct way in which to play a suit break with the queen onside. However,

combination. Take these examples: there is a safety play if only three tricks are

lead towards the jack on the third round.

This gains when the doubleton queen is

But more often it is a matter of holding

Playing a small slam with these trump ♠KJ54 ♠K95

suits and no outside loser, the only

has put us into 7♠ with the first trump cards are in the same hand. It would be

to lead low to the queen, playing for a two- guess wrong and you could have two W

two split with the king onside. But what if losers, queen-jack-other over the remain-

outside losers? Now to take the spade over the queen in case (vi).

finesse would be a serious error, at least In (iv), start with a low card from either

when playing teams or rubber bridge, where hand and, if the next hand follows with a If you need all four tricks from (vii), best

the overtrick is relatively unimportant. small card, put in the nine or ten. If that is to lead low to the jack on the first round

Cashing the ace first, then, if the king does loses, the remaining cards must fall under – that caters to bare queen onside, where

not appear, crossing to the South hand the ace and king. cashing the ace first does not. If you can

to lead low towards the queen on the In (v), the instinctive play is to cash the afford one loser, there is a 100% guaranteed

second round, wins not only every king, but that is not safe. The correct safety play (assuming that this is not the

time that finessing on the first round safety play is to start with a low card trump suit and there is a five-nil split).

would have done, but also when there is from the North hand and run it if East Cashing the ace loses out when West holds

the bare king offside. plays low. Again, if this loses the remaining Q-10-x-x, while a first-round finesse of