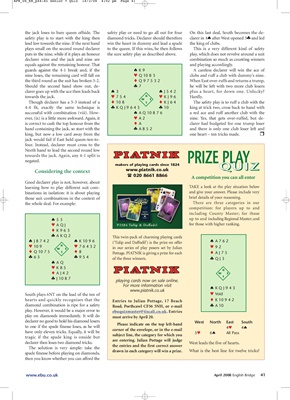 the jack loses to bare queen offside. The safety play or need to go all out for four On this last deal, South becomes the de-

safety play is to start with the king then diamond tricks. Declarer should therefore clarer in 4♠ after West opened 3♣ and led

lead low towards the nine. If the next hand win the heart in dummy and lead a spade the king of clubs.

plays small on the second round declarer to the queen. If this wins, he then follows This is a very different kind of safety

puts in the nine, while if it plays an honour the sure safety play as described above. play, which does not revolve around a suit

equals against the remaining honour. That and playing accordingly.

guards against the 4-1 break and, if the ♠ K9 A careless declarer will win the ace of

nine loses, the remaining card will fall on ♥ Q 10 8 3 clubs and ruff a club with dummy's nine.

Should the second hand show out, de- ♣ 7 he will be left with two more club losers

hand containing the jack, so start with the ♣A852 and there is only one club loser left and

king, but now a low card away from the one heart – ten tricks made.

four. Instead, declarer must cross to the

North hand to lead the second round low

towards the jack. Again, any 4-1 split is

Good declarer play is not, however, about

binations in isolation: it is about playing and give your answer. Please include very

those suit combinations in the context of brief details of your reasoning.

the whole deal. For example: There are three categories in our

including County Master; for those

♠ 53 up to and including Regional Master; and

♥ AQJ for those with higher ranking.

South plays 6NT on the lead of the ten of ♥ Void

hearts and quickly recognises that the Entries to Julian Pottage, 17 Beach ♦ K 10 9 4 2

diamond combination is ripe for a safety Road, Porthcawl CF36 5NH, or e-mail ♣ A 10

play. However, it would be a major error to ebuquizmaster@tiscali.co.uk. Entries

play on diamonds immediately. It will do must arrive by April 20.

Please indicate on the top left-hand

corner of the envelope, or in the e-mail

have only eleven tricks. Equally, it will be 5♥ 6♠ All Pass

subject line, the category for which you

tragic if the spade king is onside but

are entering. Julian Pottage will judge

the entries and the first correct answer

The solution is very simple: take the

drawn in each category will win a prize. What is the best line for twelve tricks?

spade finesse before playing on diamonds,

then you know whether you can afford the