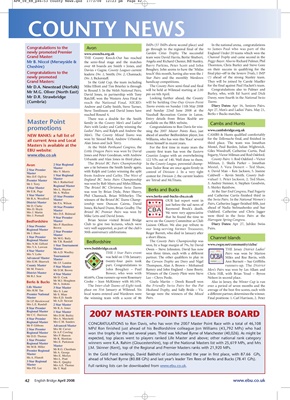 COUNTY NEWS IMPs (57 IMPs above second place) and In the national arena, congratulations

Grand Master: THE County Knock-Out has reached team were David Harris, Bertie Shiebert, Channel Trophy and came second in the

Davies v Gagne. County Leagues current Boughey. John seems to have the ‘Midas on their success in qualifying for the

Congratulations to the leaders: Div. 1, Smith; Div. 2, Channack; touch’ this month, having also won the 1 final play–off in the Seniors Trials, 1 IMP

newly promoted Div. 3, Bickerstaff. Star Pairs and the monthly Wardown (!) ahead of the strong Stanley team.

Grand Masters: In the Gold Cup, the team including handicap competitions. They will be joined by Carole Mueller

Mike Elliott and Tim Brierley is through The County Pairs semi-final and final for the final against Paul Hackett’s team.

to Round 3. In the Welsh National Pairs, will be held at Wilstead starting at 2.00 Congratulations also to Palmer and

David Jones, in partnership with Tony

Mr D.R. Strawbridge Ratcliff, won the Western Area Final to Looking further ahead, the County Davey, were fourth in the National Swiss

Master Point family in the County Men’s and Ladies’ available on the BBA website. Cambs and Hunts

NEW RANKS: a full list of Men’s. The County Mixed Teams was ahead of another Bedfordshire player, Jon CAMBS & Hunts qualified comfortably

won by Sinead Bird, Andrew Urbanski, Williams, who has won this ‘Race’ several for the Tollemache final, and finished in

all current Area and Local

Alan Jones and Jack Terry. times himself in recent years. third place. The team was Jonathan

Masters is available at the At the Welsh Porthcawl Congress, the For the first time in many years the Mestel, Paul Barden, Julian Wightwick,

Mrs V. Morris with Ralph and Lesley winning the split control of Division 1. In a very tight

Premier Master are Tetrad and McTitans.

Mr R.A. Woodford Master winners of the Bristol BC Teams Champ- the Swiss Pairs. In the National Women's

OUR last report went in

Mr D. Clarke just before the sad news of

Mrs J. Martin Bristol BC Premier Pairs was won by We were very appreciative Oakford. Catherine and Chris Jagger

Mrs J. Portnall Mike Letts and David Jones. that he found the time to were third in the Swiss Pairs at the

Roger Barrett, who died in January after

1 Star Tournament won, by a huge margin of 7%, by David www.cwgsy.net/community/cicba/

Mrs V. Lobo THE 1 Star Pairs event won three times, each with a different Pairs was won by Marion

Tournament was held on 17th January; partner. The other qualifiers to play in Miles and Roz Bavin, with

Premier National Mr S. Mian local teams entered and Wardown were Savage were the winners of the Mixed a different partner, determines the winner.

CONGRATULATIONS to Ron Davis, who has won the 2007 Master Point Race with a total of 46,108

Regional Master Dr A.P. Cowling won the trophy for the last several years. Third was Michael Byrne of Manchester (40,026). As might be

Master In the Gold Point rankings, David Bakhshi of London ended the year in first place, with 87.66 GPs,