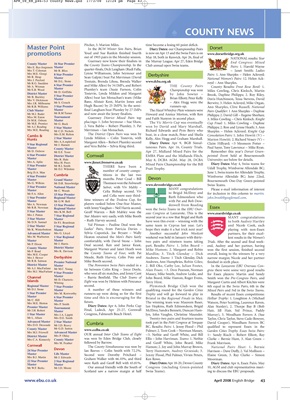 out of 1905 pairs in the Monday session.

is now on Apr 13 and the Swiss Pairs is on

County Master 16 Star Premier the County Teams Championship. In the

6 Star Premier and Mike Allen) by 34 IMPs, and Robert THE County Pairs

THERE have been a Udall Trophy, Wimborne Allendale BC;

Mr F.A. Allen 15 Star Premier for inclusion in this column to martin.

and Celia were easy third- Ruth Edmondson who

time winners of the Tredova Cup, for with Pat and Bob Dow-

seas Congress at Lanzarote. This is the www.essexbridge.co.uk

second year in a row that Brigid and Ruth MANY congratulations

– Ruth Harvey second. have won this event – winning with the to both Audrey Hartley

Mrs M.E. Cooper the County Teams of Four, with Pat Mardlin; 3. Titch Glenday – Dick overall, losing to the winners by a very

who won all six matches, and Jenny Cant Massey, Mike Smith, Andrew Leslie, and for Essex players: Martin and Sandy

Mr D.J. Stone Master A number of these winners and qualifying round for the Garden Cities Mixed Pairs and 3rd in the Swiss Teams.

1 Star Premier Mrs M. Kenworthy runners-up were doing so for the first Trophy and will go forward to play in Results of recent Essex competitions:

Master 6 Star Premier time and this is encouraging for the

Bristol in the Regional Finals in May. Helliar Trophy: 1. Loughton A (Michael

BC. Results: Pairs: 1. Jenny Flood – Phil qualified to represent Essex in the

Scotland saw a narrow margin at half Swiss Teams). ing to discuss the EBU proposals.