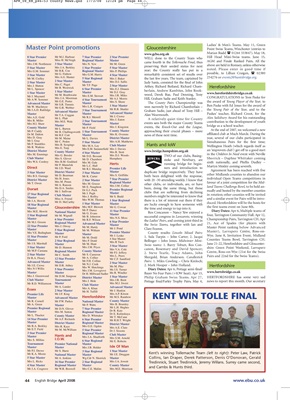 preserving their seeded status for next above are held in Romsey, unless otherwise

Mr B.K. Coe year; the County really has put in a noted. Please enter in good time if

Master Mrs S. Shore The County Pairs Championship was the award of Young Player of the Year, to

Advanced Master 3 Star Tournament Mr R.B. Shutler Graham Sadie, just ahead of Tony Hill – the Young Pair of the Year, and to the

A relatively quiet time for County

Master bridge as a school teacher.

Mr P. Caddy 1 Star Tournament County Master approaching their crucial phases – more At the end of 2007, we welcomed a new

Dr M. Dalton Mr R.F. Cott Master Mrs K. Overens news of these next time. affiliated club at Much Marcle. During the

4 Star Master in the Children In Need event with Neville

District Master Master duplicate bridge respectively. They have Agreement has been reached with five

Mrs B.S. Gamage Mr D. Bearman Mrs S. Griffiths both been delighted with the response, other Midlands counties to abandon our

Mr A. Ranson Mrs M. Grasso other clubs, or individuals, are, or have

Dr G.J. Pack Premier Regional been, doing the same thing, but those

Mr J. Sullivan clubs that are suffering from declining nually and hosted by the member counties

Club Master Mrs J. Roffey Mr S. Budd numbers might be interested to know that in rotation; other counties will be invited

Master Miss A. Friend and a similar event for Pairs will be intro-

Mr J.A. Howitt Mrs W.M. Thomas 1 Star Regional there is a lot of interest out there if they

Mr D. McCarthy duced. Herefordshire will be the hosts for

the time and energy to tap into it. the first teams event on June 8th.

Regional Master Advanced Master 21, Ace of Spades (for players with

22 Star Premier Mrs J. Otway Master the Swiss Teams, together with Ian and