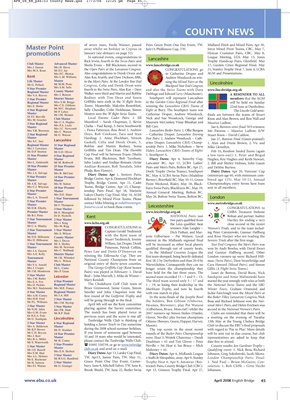 Master Point away whilst on holiday in Cyprus in July13, Phillimore Cup, TW. Joyce Mixed Pivot Teams, CBC. May 7,

In national events, congratulations to

Rick Irwin, fourth in the Swiss Pairs and

Mrs P.C. Morton Also congratulations to Derek Oram and to Catherine Draper and AGM and Presentations.

Life Master Master in the Men’s Pairs. At the London Year End ning the Mixed Pairs at the

Mrs V.A. Reeves Mrs J. Benson Walker were third and Martin and Bobbie Debbage and Edward Levy (Manchester). A REMINDER TO ALL

Regional Master Miss S.M. Briggs Griffiths were sixth in the ‘A’ flight Swiss in the Garden Cities Regional Final after will be held on Sunday

4 Star Regional Eight at Bury. The Southport team was The Lincoln Gold semi-

Master Mostyn won the ‘B’ flight Swiss Teams. Catherine Draper, Andrew Woodcock, finals are between the teams of Stuart

11 Star Premier 4 Star Regional Cup Final will be between Evans (Sheila 1. Southport A. a low turn-out): 1. Peter and Brigid

Mr D.R. Ellerby freeserve.co.uk to book these events. CONGRATULATIONS to

two pairs qualified from Hartley for ending a very

winners Alan Langley – Women’s Trials, and to the team includ-

Mr D.E. Hilbourne with the Kent team of jorie Gilbertson – Pat Watson. Local and Ross Harper who are leading the

1 Star Tournament Mr A. Hedley Willans, Ian Draper, Derek will be increased as other local players Year End Congress: the Men’s Pairs was

In the Midland Counties League the and Gunnar Hallberg second. Other

Master Mrs L. Wilson National County Champions from an first 18-2 by Derbyshire and then 20-0 by man (Swiss Pairs), Dave Strawbridge and

Leicester second team recorded 13 – 7 and 5 – 15. Sandqvist and Artur Malinowski have

Mrs E.A. Fox 4 Star Premier Mary Kendall. The third team scored only 3 – 17 and started the year strongly with wins at both

Mrs D. Pickles Regional Master The Chislehurst Golf Club team of 1 – 19, so losing their leadership in the the National Swiss Teams and the SBU

4 Star Master Regional Master Smollet and John Chapman won the with one match to play. Jackie Fairclough won the Mixed Pairs at

Mrs A.H. Carney Ms J.A. Hill first round of the Golfprint Trophy and

In the semi-finals of the Josephs Bowl the Baker Tilley Lanzarote Congress, Nick

2 Star Master will be going through to the final.

playing against the Surrey committee. (Gilbertson, Bruce, Moncrief) whilst the second in the National Women’s Pairs.

Mrs G.M. Evans Mr R.P. Shah The match has been played twice in 2007 runners-up Simon Stokes (Haider, Clubs are reminded that there will be

Dr H.S.A. Fido previous years and the score is one all!

Mr B.P. Brown Mr D. Stoddart during the 2008 school summer holidays. The top scores in the most recent with regard to ‘Pay to Play’. More details

Mr C.D. Bryson 14 Star Premier If you know of someone aged between rounds of the Butler Pairs Championship will be sent out in due course, but club

Mrs J. Kerr Master 10 and 18 years who would be interested,

were: Heat 3, Wojtek Charemza – Derek representatives are asked to keep that