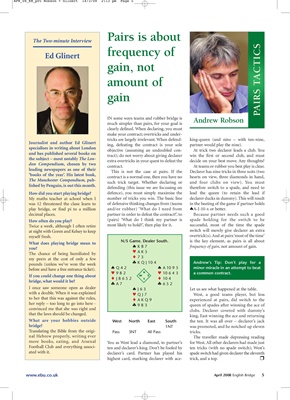 The Two-minute Interview Pairs is about

IN some ways teams and rubber bridge is

much simpler than pairs, for your goal is

clearly defined. When declaring, you must

make your contract; overtricks and under-

tricks are largely irrelevant. When defend- king-queen (and nine – with ten-nine,

Journalist and author Ed Glinert ing, defeating the contract is your sole partner would play the nine).

specialises in writing about London objective (assuming an undoubled con- At trick two declarer leads a club. You

and has published several books on tract); do not worry about giving declarer win the first or second club, and must

the subject – most notably The Lon- extra overtricks in your quest to defeat the decide on your best move. Any thoughts?

don Compendium, chosen by two contract. At teams or rubber you best play is clear.

leading newspapers as one of their This is not the case at pairs. If the Declarer has nine tricks in three suits (two

‘books of the year’. His latest book, contract is a normal one, then you have no hearts on view, three diamonds in hand,

The Manchester Compendium, pub- such trick target. Whether declaring or and four clubs on view). You must

lished by Penguin, is out this month. defending (this issue we are focussing on therefore switch to a spade, and need to

How did you start playing bridge? defence), you must simply maximise the lead the queen (to retain the lead if

My maths teacher at school when I number of tricks you win. The basic line declarer ducks in dummy). This will result

was 12 threatened the class: learn to of defensive thinking changes from (teams in the beating of the game if partner holds

decimal places. partner in order to defeat the contract?’, to Because partner needs such a good

How often do you play? (pairs) ‘What do I think my partner is spade holding for the switch to be

Twice a week, although I often retire most likely to hold?’, then play for it. successful, most of the time the spade

myself fresh. overtrick(s). And at pairs ‘most of the time’

What does playing bridge mean to N/S Game. Dealer South. is the key element, as pairs is all about

you? ♠K87 frequency of gain, not amount of gain.

The chance of being humiliated by ♥AK5

If you could change one thing about W E

bridge, what would it be?

I once saw someone open as dealer ♠J63 Let us see what happened at the table.

with a double. When it was explained ♥QJ7 West, a good teams player, but less

to her that this was against the rules, ♦AKQ9 experienced at pairs, did switch to the

convinced me that she was right and clubs. Declarer covered with dummy’s

that the laws should be changed. king, East winning the ace and returning

What are your hobbies outside West North East South the ten. It was all over – declarer’s jack

bridge? 1NT was promoted, and he notched up eleven

Translating the Bible from the origi- Pass 3NT All Pass tricks.

nal Hebrew properly, writing ever The traveller made depressing reading

more books, eating, and Arsenal You as West lead a diamond, to partner’s for West. All other declarers had made just

Football Club and everything associ- ten and declarer’s king. Don’t be fooled by ten tricks (with no spade switch); West’s

ated with it. declarer’s card. Partner has played his spade switch had given declarer the eleventh

highest card, marking declarer with ace- trick, and a top.