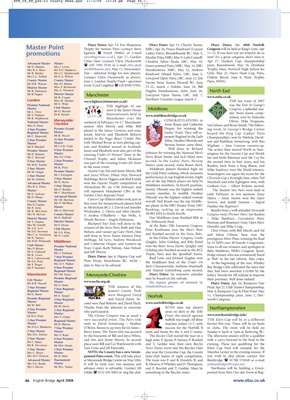 Ladies Pairs), Blundellsands BC. May 5,

Club Master THE highlight of our

Mr G. Berzins news is the Junior Home Middlesex Congress, a splendid one-

Mr R. Stephenson Manchester over the etition, won by Malcolm

played in the Junior Camrose and won;

Regional Master Ladies’ Trials. They will re- hosted the King Cup (Ladies’ Pairs

present England in the Lady Championship), won by Marlene David-

Milne. Heather Dhondy and son and Kathleen Armstrong, with Ros

Premier Master Jenny and Elizabeth were also part of the

winning Under-25 Women’ Team in the

Senior came second, Anne Rosen third. Rankin, back from a long illness, and

the Gold Point ranking, which measures Stannington was again the scene for the

Mr D. Howe out of the top fifteen places are held by Murdoch and John Eglington won, with

Altrincham BC on 17th February and

Mr C. Hutchinson will represent Manchester CBA at the

Mr N. Irens at Altrincham BC): 1. David and Jennifer

Mr B. McCarron Mrs A. Harwood Ranking, racking up an impressive Results from a well-attended Newcastle

At the Baker Tilly Lanzarote Congress, Dorothy and Mike Craig.

and finished second in the Swiss Pairs. and Julian Gibson, have won the

Premier National won the Bears Swiss Teams. Quigley and tions to all our winners, and apologies to

Regional Master as ‘Bob’ in the last edition. Mea culpa.

Mr S.S. Potel Plate Finals, Manchester BC. AGM – the Middlesex heat of the Under 19s

Mr S. Prager Mrs G.V. Walker At the beginning of the year, Whitley

date in May to be advised. Pairs Championship. Anthony Martinelli Bay Bridge Club celebrated the news that

Regional Master and Alastair Gartenberg came second. they had been awarded £10,000 by the

Premier Regional may be found on the website. their premises. Well done indeed!

Thanks from the selectors to everyone WITH nine top players Northamptonshire

2 Star Regional who participated. away on duty in the Tolle

Dr H.A. Potts The Chester Congress was as usual a Final, the match against www.northantsbridge.info/

1 Star Premier Regional Master very successful event. The Pairs title Suffolk was tough. All three THE Eden Cup will be in a different

Master Mr B. Murray went to David Armstrong – Stephen matches ended 13-7, with format this year. There will be no heats

Mr D.G.J. Matthews 7 Star Premier O’Brien. Runners-up were Kevin Jones – success for the Norfolk B in clubs. The event will be held on

3 Star Master Master Barry Jones. The Teams title was secured team and losses for the A and C teams. Sunday 6 April at 1pm at Kettering BC.

Mrs D.L. Dicken Mrs S. Karp The afternoon session will be a qualifier

by the foursome of Bill and Joyce White, The Beccles Club started the year on a

2 Star Master 4 Star Premier and Jim and Jenny Morris. In second high note: P. Spratt, P. Sutton, P. Rowlett with a carry forward to the final in the

place were Bill and Liz Wattleworth with and T. Geshke won their own Beccles evening. Those not qualifying for the

Mrs C. Bloch Master NOTE: the County has a new Green- also won the Committee Cup, the County Murchie Lerner in the evening session. If

Advanced Master Tournament at Merseyside Bridge Centre on May 10th. The team was P. and B. Howlett, B. and Bainbridge 01788 570468 or e-mail

Mrs P.A. Booth Master It will be held over two sessions and R. Shreeve, P. Whittley and D. Thompson, jimbainbridge1@virgin.net.

advance entry is advisable. Contact Jill and P. Rowlett and T. Geshke. Must be Northants will be holding a Green-