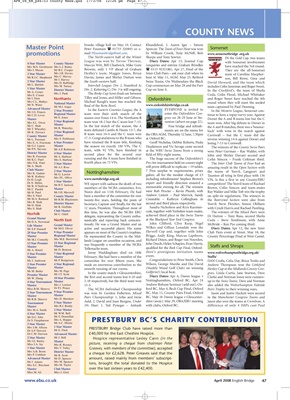 The North-eastern half of the Winter

IN the Gold Cup, two teams

2 Star Master the South-western half. Swiss Teams. On Wednesdays the Black David Howard, and the team which

Mr A. Corner In the Crockford's, the team of Sheila

Mr I. Dent Northants Tilley and Jones, and Miller and Gibson. and Roger Sweet have reached the 4th

National Master round where they will meet the seeded

Advanced Master In the Eastern Counties League, the A EVERYONE is invited to

Mr C.D. Lever Regional Master team won their sixth match of the enter the Oxfordshire Con- tinue to have a topsy-turvy year. Against

team won. After big defeats to Dorset in

Mr C. Shah In the last match of the season, the A Free bridge and refresh- the A and B matches, there was a ‘bounce-

team defeated Cambs & Hunts 13-7, the ments are on the menu for back’ with wins in the match against

Mr L. Freeman Mrs S. Parkhouse 17-3. Congratulations to the B team who at Oxford BC. reverse winning 14-6 against Dorset and

Mr P.N. Stevens Mr A.P. Robinson team, with 92 VPs, have finished in at the WBU Swiss Teams from a strong were Peter Gurman – Ray Walder, with

field of fifty-eight teams. John and Shirley Durant second and

Mr K.C. Patel Mrs S. Harbour running and the A team have finished in The huge success of the Oxfordshire’s Colin Simcox – Frank Coltman third.

Mr A. Sheth Mr A.J. Ross will prove difficult to replicate – 19 tables, amazing result in the Open Section with

Mrs K. Gadani Nottinghamshire the teams of Yeovil, Langport and

Mr G. Lawlor galore, all for the modest charge of £3 Taunton all tying in first place with 136

Dr H. Leigh www.nottsbridge.org.uk including refreshments! Stephen Brown’s VPs. Is this a first in any County/EBU

Dr N. Mehta WE report with sadness the death of two expert and friendly direction ensured a competition? The Yeovil team of Rachael

Master members of the NCBA committee. Eric memorable evening for all. The winners Brown, Colin Simcox and team-mates

Mrs S. Patel County Master been a member of the committee for over Andrew Lintott – Paul Merrick, Sandy on split-tie regulations. The winners in

Mr R. Griffiths 12 years, President. Throughout most of Sandra Nicholson and Krys Kazmier- with Cyndi Harris and Rachael Pantling.

Club Master czak, together with Yorkshire team-mates, The winners of the Mixed Pairs were

Norfolk this time, he was also the NCBA EBU

29 Star Premier 9 Star Premier appears on most of the County’s trophies. Harwell Cup and, together with John Club Pairs event at Street. May 18, the

lands League on countless occasions, and

was frequently a member of the NCBA Staffs and Shrops

Master Master February. She had been a member of the event. Staffs/

4 Star Tournament Master 2-18 respectively, but the third team won Nottinghamshire, Oxford BC. Apr 24 up in the Swiss Teams. Dave and Norman

Mrs D. Henshaw Pairs Championship: 1. John and Irene BC. May 18 Dawes league v Gloucester- in the Manchester Congress Teams and

5 Star Master Auld, 2. David and Joan Burgess. Under shire (away). May 29, OBA/EBU meeting Jason also won the teams at Cwmbran. A

Master Club Master over the last sixteen years to £42,400.