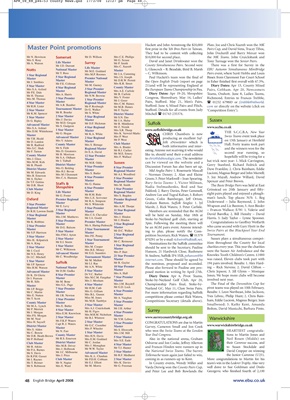 Hackett and John Armstrong the $20,000 Plate. Joe and Chris Xuereb won the 30K

Mr J.D. Durrant Mrs C. Xuereb County Simultaneous Pairs. Second were There was a first for Surrey in the

Mrs A. Harris Mr B. Carlisle

Club Master folk eNewsletter which is

Mr S. Firth Mrs A. Binder both informative and inter-

Mrs S.C. Shah Regional Master and the winners won for the

Mr R.J. Carlier esting. Anyone not receiving it who would

12 Star Premier like to, should send their e-mail address

to chris@dubiouslogic.com. The newsletter hopefully will be trying for a

can be viewed on the website and a hat trick next year: 1. Mick Carrington,

will be held on Sunday, May 18th at

Master Ms A. Haring-Pedrocchi 3 Star Regional who came second with Gary Hyett in the

Mr A. King Master Nominations for the Suffolk committee

Master should be sent to the Secretary, Pauline charities every year. This year the charities

Mr M. Mullett Master internet.com. These should be agreed by was raised. Eleven clubs took part with

For more information regarding Suffolk

Capt R..I. Waters 3 Star Premier CONGRATULATIONS are due to Martin

Also in the national arena, Graham Neil Rosen (Middx) on

Mr B. Atkins Mr T.J. Hunter and Frances Hinden were runners up in to Susan Stockdale and

Mr I. Raynes Club Master Mr P.D.H. Cobham 2 Star Master coming in as runners-up to Kent. More congratulations to Martin for his

and Peter Lee and Bob Rowlands the Georgevic who finished fourth of 2,100