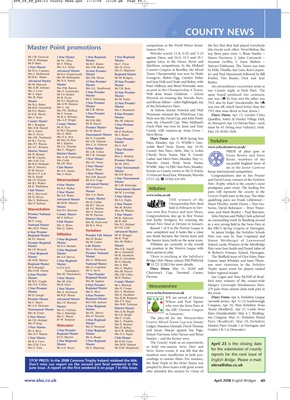 Master Point promotions taneous Pairs. else except each other. Nevertheless, the

against Leics, in the Dawes, Porter and Suzanne Griffin; 3. Joyce Skelton –

An extraordinary occurrence arose at

Mrs J. Lowe Mrs T. Czernuszka second in the Championship A Teams. our County night at Holt Fleet. The

Mr C. Enticknap Mr M. Porter one was 1♣ by East and the other was

Mr M.E. Greenfield Mrs L. Jan Master Master of the Introductory Pairs. was one off, which fared better than the

Doyle Plate was won by Janet and Tony must be 65 (bring your Valium!), Holt.

Mr B.J. Walker Advanced Master Pairs Trophy, which is the county’s most

2 Star Master Mr M. Loveridge pairs will represent the county in the

Mrs M.D. Parker Mrs G. Talbot Dr J.H. Little Round 7 of 9 in the Premier League is the EBU’s Spring Congress at Harrogate.

6 Star Premier Yorkshire Advanced Master now completed and it looks like a close In junior bridge, the Yorkshire Schools

Regional Master Wiltshire Premier Life Master Mr B. Brugger run finish between the Davies team and Pairs was won by Tom Copeland and

Master Master Mr R. Gembicki There is teaching at the Salisbury The Sheffield team of Glyn Foley, Peter

Mrs C. Count The play-off for the Worcestershire

The County tried, as an experiment, April 23 is the closing date

Swiss Teams events. It was felt that the for the submission of county

ceedings to sustain them. For instance, English Bridge. Please e-mail:

STOP PRESS: in the 2008 Camrose Trophy Ireland retained the title.

June issue. A report on the first weekend is on page 7 in this issue.

who attended this section by virtue of