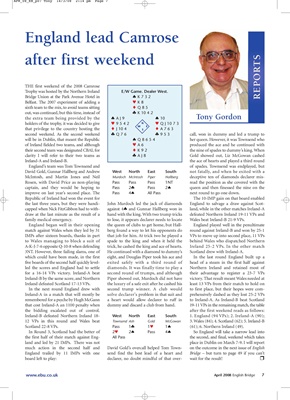 THE first weekend of the 2008 Camrose

Bridge Union at the Park Avenue Hotel in ♠K732

sixth team to the mix, to avoid teams sitting ♦Q85

the extra team being provided by the ♠ AJ9 ♠ 10 Tony Gordon

will be in Dublin, that meant the Republic ♠Q8654 her queen. However, it was Townsend who

of Ireland fielded two teams, and although ♥A6 produced the ace and he continued with

their second team was designated CBAI, for ♦K92 the nine of spades to dummy’s king. When

clarity I will refer to their two teams as ♣AJ8 Gold showed out, Liz McGowan cashed

Ireland-A and Ireland-B. the ace of hearts and played a third round

England’s team was Tom Townsend and of spades. Townsend was endplayed, but

David Gold, Gunnar Hallberg and Andrew West North East South not fatally, and when he exited with a

Rosen, with David Price as non-playing Pass Pass Pass 1NT read the position as she covered with the

captain, and they would be hoping to Pass 2♣ Pass 2♠ queen and then finessed the nine on the

improve on last year’s second place. The Pass 4♠ All Pass next round to go one down.

the last three years, but they were handi- John Murdoch led the jack of diamonds England to salvage a draw against Scot-

capped when Nick FitzGibbon had to with- against 4♠ and Gunnar Hallberg won in land, while in the other matches Ireland-A

draw at the last minute as the result of a hand with the king. With two trump tricks defeated Northern Ireland 19-11 VPs and

England began well in their opening the queen of clubs to get home, but Hall- England played well in the penultimate

IMPs after sixteen boards, thanks in part that job for him. At trick two he played a VPs to move up into second place, 11 VPs

3NT. However, three failing slams, one of He continued with a diamond to dummy’s Scotland drew with Ireland-A.

which could have been made, in the first eight, and Douglas Piper took his ace and In the last round England built up a

led the scores and England had to settle diamonds. It was finally time to play a Northern Ireland and retained most of

for a 16-14 VPs victory. Ireland-A beat second round of trumps, and although their advantage to register a 23-7 VPs

Ireland-B by the same score, and Northern Piper showed out, Murdoch did not have victory. That result meant Wales needed at

Ireland defeated Scotland 17-13 VPs. the luxury of a safe exit after he cashed his least 13 VPs from their match to hold on

In the next round England drew with second trump winner. A club would to first place, but their hopes were com-

remembered for a psyche by Hugh McGann a heart would allow declarer to ruff in to Ireland-A. As Ireland-B beat Scotland

that cost Ireland-A an 1100 penalty when dummy and discard a club from hand. 19-11 VPs in the remaining match, the table

the bidding escalated out of control. after the first weekend reads as follows:

In Round 3, Scotland had the better of 2♥ 2♠ Pass 4♠ So England will take a narrow lead into

the first half of their match against Eng- All Pass the second, and final, weekend which takes

land and led by 21 IMPs. There was not place in Dublin on March 7-9. I will report

board left to play: declarer, no doubt mindful of that over- wait for the result!